When you have the second-worse record and goals against average in the NHL last season, you lean towards building your franchise with a young defenseman who is NHL-ready today. 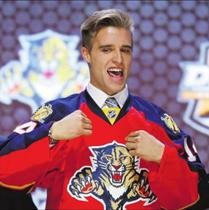 Aaron Ekblad reacts to putting on the Florida Panthers sweater for the first time at the 2014 NHL Entry Draft.

And that is what the Florida Panthers did Friday night by selecting Aaron Ekblad with the No. 1 overall selection in the 2014 NHL Entry Draft. The 18-year-old defenseman played the last three seasons in the OHL with Barrie Colts. He becomes the first defenseman taking No. 1 overall since St. Louis drafted Erik Johnson in 2006 and the first player taken No. 1 overall by the Panthers since his teammate Ed Jovanoski in 1994. When Ekblad was born, Jovanoski was beginning the memorial playoff run the Panthers had to the Stanley Cup final in 1006. Ekblad hopes to duplicate the same in his career.

The moments before the name was called caused for a little drama inside Wells Fargo Arena. “We proudly select, with the first pick overall of the 2014 NHL draft from the Ontario Hockey League,” Tallon told an anxious arena. And then he paused for dramatic effect. “Aaron Ekblad,” Tallon said.

“I did not know,” said Ekblad. “I was freaking out there for a second when he stopped. It was breath-taking to say the least.”

“I made Ekblad sweat a little,” Tallon added about the Belle River, Ont. native.

“He was a pretty special player,” said Ekblad. “Everyone says he’s a great person off the ice, too, and I think that’s pretty important.” What else does he like about Lidstrom? “Attention to details,” said Ekblad. “Knowing when to be simple, when to jump into the rush and provide offense. Playing good defense first. Being good on the power play and penalty kill. It takes being an all-around, full-package player. A two-way defenseman.”

Last season he served as Barrie’s captain, where he played in 58 regular season games scoring 23 goals along with 30 assists. In the OHL playoffs he appeared in nine games, scored twice to go along with four assists. It was his best statistical season during his time in the OHL, except for plus-minus where he was better in 2012-13 (+29) than this season (+7) in the regular season.