Kings Keep Gaborik Around with Extension 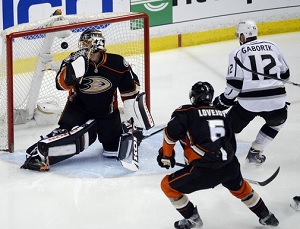 Trading for a player with an expiring contract to help you win the Stanley Cup is always a gamble. Sometimes the rent-a-player doesn’t always work out (see Ryan Miller) but sometimes they pan out to help you win the Stanley Cup. Los Angeles wanted to make sure they kept one of the best players in the 2014 playoffs around for years to come when they re-signed Marian Gaborik to a seven-year, $34+ million contract Wednesday.

Gaborik came to Hollywood from Columbus March 5 for Matt Frattin and two 2014 draft picks. In his short time on the west coast, he scored 19 goals and 19 assists while playing in 45 games. He found his form in the playoffs as he was the fourth-leading point earner of all playoff participants with 22. His 14 goals led all playoff players.

When he arrived in Los Angeles, his scoring ability allowed coach Darryl Sutter to split Jeff Carter and Anze Kopitar to give his squad multiple lines that can provide scoring offense. This change increased their offensive production, averaging 3.38 goals per game in the playoffs compared to 2.42 in the regular season.

His annual cap hit of $4.875 million of smaller than what he’s used to commanding in the past, but general manager Dean Lombardi had to be creative during contract negotiations as he has to try to keep the championship winning roster together as best as he could. Lombardi is taking a risk on the back end of the contract. The two-time Olympian for Slovakia has a history of injuries in his career. He didn’t represent his country at the 2014 Winter Olympics due to a broken collarbone suffered December 21 when he was with Columbus. This season he played in a career-low 41 games between the two teams, even fewer than the lockout-shortened 2013 season when he played in 47 games between New York and Columbus.

He’s reached the 30-goal mark seven times in his career, the last time coming in 2011-12 with New York. That season he played all 82 games, scoring 41 goals and 35 assists. He was also named the Most Valuable Player of that seasons All-Star game in Ottawa.