OHL History Made with Outdoor Doubleheader 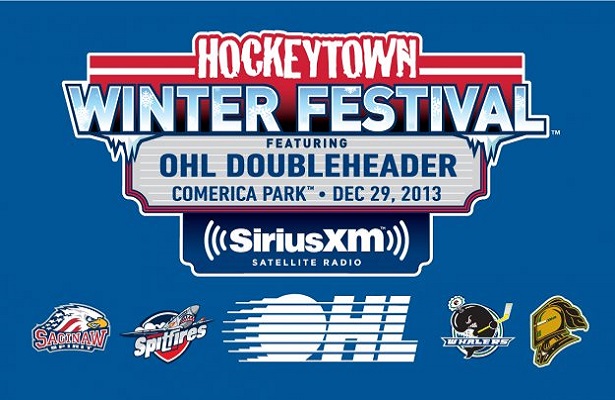 The NHL Winter Classic wasn’t the only outdoor game taking place in Detroit/Ann Arbor this week. Comerica Park has been transformed into an outdoor rink and for the past week has played host to youth, high school, college and junior hockey. Monday the AHL affiliates of the Red Wings and Maple Leafs will square off before the legends of the Original six franchises play a double header Tuesday.

Sunday afternoon were the first outdoor games in Ontario Hockey League history as Saginaw played Windsor and Plymouth played host to London. The last league doubleheader was played on March 5, 1961, at Maple Leaf Gardens featuring the Guelph Biltmores and the St. Michael’s Majors who played to a 4-4 tie, and the Hamilton Red Wings who defeated the Toronto Marlboros by a 4-2 score.

In the wild first game, the Spitfires and Spirit traded the lead multiple times before Steven Janes scored a shorthanded goal with less than six minutes remaining to win the game 6-5 in favor of Windsor. There were six power plays goals in the contest, three by each team. The two power play goals Saginaw scored in the third period came at the expense of five consecutive penalties taken by Windsor. The Spitfires were led by Canadiens prospect Brady Vail’s three assists. He helped erase a two-goal deficit early in the second period, with two coming in a 33 second span. But the Spirit weren’t going down without a fight as they got power play goals from defensemen Justin Sefton and Brandon Prophet in the third period on goaltender Alex Fotinos, who relieved Dalen Kuchmey at the second intermission. 2014 NHL Draft prospect Nikita Serebryakov made 23 saves in the winning effort.

The second game featured fewer goals but was just as exciting as Plymouth defeated London in a shootout 2-1 in front of 26,834 fans. The game went scoreless until early in the third period when 2014 Draft prospect Mathieu Henderson scored 1:38 into the third period for the host Whalers. The tying goal was scored late in the game via power play when Mitch Jones was called for interference and the Knight called timeout with 2:48 remaining in the same. San Jose prospect Chris Tierney scored with 2:14 remaining with assists from Max Domi and Alex Basso. After overtime wasn’t enough to find a winner, the Whalers won the shootout in the fourth round when 2014 prospect Francesco Vilardi scored the game winner. Jake Patterson took the loss, making 25 saves on 26 shots. Alex Nedeljkovic earned the win, stopping 44 of 45 London shots.

Windsor maintains second place in the West division with 47 points. Trailing Sault Ste. Marie and Windsor in the division standings are Saginaw and Plymouth with 37 and 30 points respectively. London plays in the Midwest division and they currently sit third place but five points behind leaders Erie and Guelph.