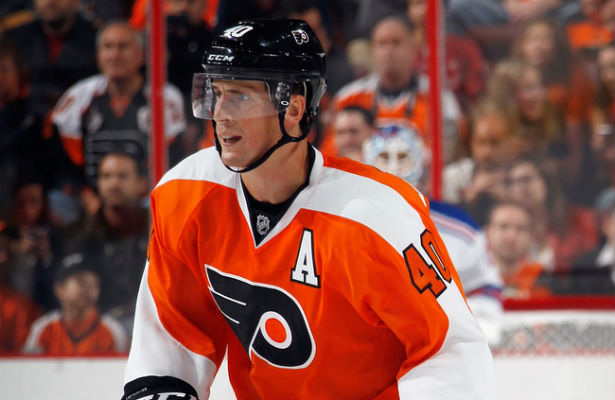 The following is a guest post from James Minger who has been writing his own Flyers blog, Flyers-Philia@Blogpost.com since 2011.  He too is a goaltender that will not be playing for Philadelphia this year, although he will not be receiving a buyout stipend for the next bajilion years.

To paint you a picture of the current state of the Flyers, please enjoy this brief dialogue between the Stanley Cup and Owner, Ed Snider:

Ed Snider (Ed) (in a begrudged tone): You could say that…

Ed (infuriated): You know what, Stanley Cup… GO F YOURSELF!  Jeremy Jacobs, Murray Edwards, Mike Illitch, and I own this league!  On top of that, Stanley Cup, your mother goes to college!

To say the least, things are tense here in Philly.  Yes, the Flyers are annually considered “contenders” for the Cup but in the last 40 years that has only gotten them six 1st place loser titles (Cup runner-up) and a mixed bag of playoff “success” with the odd non-invitation to the post-season.  Needless to say, this town is ravenous for the Cup.

This year, the Fly-guys are coming off one of those odd years of missing the playoffs.  This is also the inaugural year of the Metrosexual division making those playoff invites even harder to receive.   General Manager, Paul Holmgren’s solution is to address this season with “the best offense, is the best offense” mentality as the hockey players of Broad Street will attempt to overcompensate for a defense/goaltending corps that makes me more nervous than Tim Thomas at the Democratic National Convention

Offense: Vincent Lecavillier is the newest disciple of Giroux-salism in that he will be the Francis to his Lemieux, Forseberg to his Sakic, or Federov to his Yzerman.  Point being, as talented and great as Giroux is, he is much easier to defend if there is no secondary threat at the #2 center position.  The addition of Lecavillier takes pressure off Giroux, and almost more importantly allows 20 year old, Sean Couturier time to properly develop.  Bottom line, Lecavillier gives every player on the offense a more defined role and should produce more consistent performances from all.

The Flyers offense is built to out gun every opponent it faces.  Giroux is the best center this town has had since Lindros, Hartnell (if he can stay on his feet) should challenge for 40 goals, Voracek and Lecavillier can reasonably be expected to break the 80 point barrier.

This is not to say that there aren’t question marks.  Essentially, as talented and as promising as young-guns Couturier, Brayden Schenn, Michael Raffl, and Scott Laughten are, all of these dudes are younger than cell phones and the internet and production on a nightly basis has to be a concern until it is achieved.

Defense: The biggest addition to the D-corps this offseason was really an offensive addition in Mark Streit.  Despite the Flyers having the third best power-play last year, Streit was brought in to better the man advantage.  The Flyers’ second PP unit was impotent and flaccid like the before guy in one of those commercials, and the reason is because there was no quarterback to run the second unit.  Streit will provide the testicular fortitude to round out the Flyers power play, easing the burden on, minutes for Kimmo Timonen.

From an actual defensive standpoint, the major criticism is that this defense is overpaid with little return which is true, but not why you would think.  Philly ranked 23rd in goals against per game last year but it couldn’t stay healthy.  Given that it would not surprise me at all if Nicklas Grossmann has post concussion syndrome, Andrej Meszaros’ spine has been put together more than a Jenga set, and somehow, someway Timonen finds a way to keep playing despite blocking 1 trillion shots a year with his 5’11” frame it’s tough to remain competitive.

IF this defense can even come close to staying healthy, then, and only then will it be a top-10 D-squad and yield a GAA in the 2-2.5 neighborhood.

Goaltending:  You know there are just some positions that the Flyers are good at producing, and then others, not so much.  That being said, let’s just say that the Flyers are the number one outsourcers of netminders in the league.  I understand that Philly is the town of Rocky and therefore, and that I’m suppose to love the underdog but  I do not however, love the idea of duel-underdogs minding the net of a team that is technically over the salary cap.

My fear is that Steve Mason is the present day Andrew Raycroft and that this is his “Toronto stop” in his career in that he’s being given one last chance to be a starter only to fall short.  Whereas I much rather have Mason at the “Dallas juncture” of Raycroft’s career in that he’s an above average backup.

My fear about Ray Emery is that he’s the present day Ray Emery.  The highs are high but man, are the lows low with Razor.  Emery’s approach to goaltending has always been akin to Ricky Bobby’s mantra of “If you’re not first, you’re last.”  Razor is going to play hard, and is going to give everything his miracle hip can withstand but just like another Philly sports figure, Ryan Howard, he may lead the league in homeruns but he will do so while leading the league in strike-outs.

The Flyers’ net is high-risk, high-reward.  Sure, Mason and Emery’s combined salary is $3.15M but more often than not in this life, you get what you pay for.  However, at the same time, this franchise’s last two cup appearances have been off the backs of netminding tandems (Ron Hextall/Garth Snow in 1997, and Brian Boucher/Michael Leighton in 2010), so what the hell do I know.

Expectations: All-in-all, as long as they stay healthy, the Flyers should boast 6-8 twenty goal scorers, an above-average defense, and a goaltending tandem that will put you on one hell of an emotional rollercoaster.  Essentially, this team will go as far as the offense can carry it.  With that said, I think that the Flyers will be in the top-5 in scoring and can go as far as the Eastern Conference final only to watch it all crumble down in overtime from a wimpy, feeble Patrick Kane-ish series ender ala 2010.

If this offense doesn’t regularly pot 3-5 goals a night they will miss the playoffs, and this time next year we will be talking about how new General Manager, Ron Hextall plans to move forward after trading half his team for goaltender, Jonathan Quick.