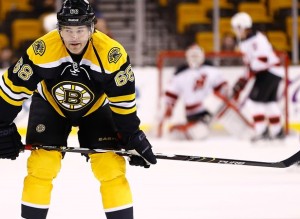 Little would Jaromir Jagr know that he would be wearing the Devils crest behind him. Photo Credit: Joe Gill/Boston Sports Then and Now

Lou Lamoriello didn’t need much time to figure out who would replace Ilya Kovalchuk and David Clarkson. And of the players remaining on the free agent market, he got one of the biggest fishes in the sea.

A source told ESPN.com that 41-year-old Jaromir Jagr has agreed to a one-year deal with the club. The Czech Republic international started last season with Dallas before being traded to Boston at the trade deadline. Jagr had 16 goals and 19 assists in 45 games for the Bruins and Stars this past season. He recorded 10 assists in 22 playoff games with Boston. Long past his peak when he’s won a Hart Trophy and five Art Ross Trophies, he can still provide a threat on offense and on the power play. He is 19 goals away from reaching 700 for his career.

ESPN reports an announcement regarding the signing is set to take place tomorrow. There was also reports that Jagr visited the Devils and the Prudential Center last week. That report was refuted by his agent, with the agent only saying that the visit was a “possibility” without actually confirming whether or not he visited the club. Jagr is tapped to help replace some of the scoring lost when Kovalchuk retired in lieu of the KHL and Clarkson signed a free agent deal with Toronto.