Karlsson Out Indefinitely After Achilles Cut 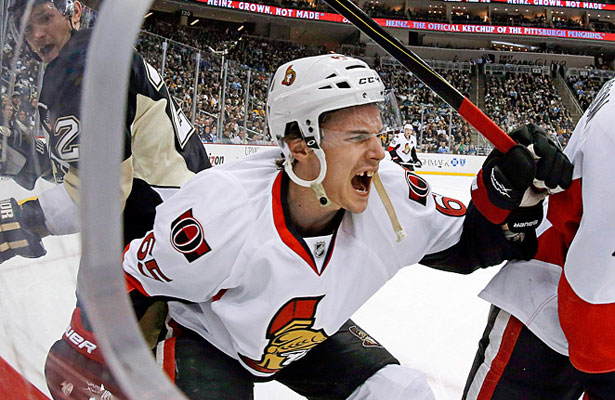 In what could be described as a worst case scenario for the Ottawa Senators, the team will likely be playing the remainder of the season without All Star and Norris Trophy winning defenseman Erik Karlsson.

Karlsson was injured in last nights game against the Pittsburgh Penguins when he got tangled against the boards with Matt Cooke, who then accidentally stepped on the back of his leg. Cooke’s skate blade lacerated Karlsson’s leg, and cut into his Achilles tendon. Surgery will be required to repair the Achilles, and will be followed by a lengthy recovery period.

“It’s a tough blow,” said Senators captain Daniel Alfredsson. “Obviously, the way he’s playing, and how much he means to our team, it feels terrible and I feel really bad for him.”

The severity of the injury was quite apparent from Karlsson’s reaction on the ice. He immediately yelled out in pain and collapsed down on the ice. After standing again, he tried to make his way to the bench but winced in pain as he tried to push off with his left leg. The referee and teammates helped him to the bench, but Karlsson was visibly frustrated as he threw his stick towards the boards.

“You knew right away there was an issue,” said Craig Anderson, the Senators goalie. “He’s a player who is irreplaceable. It’s unfortunate, but there are no words that can explain what we’re feeling.”

This shortened season continues to get harder for the Senators, who have already lost Jason Spezza to an injury. He played in only five games before suffering a herniated disc in his back. Spezza had successful surgery to repair the injured disc and the Senators remain optimistic about his return before the end of the season.

Karlsson, however, may have a longer road to recovery ahead of him. In a similar injury to Andre Markov in 2009, the Canadians defenseman required surgery and missed half of the season.

Karlsson and Spezza could return at the perfect time, but the Senators need to keep the ship afloat while the two remain on injured reserve.

In case you haven’t seen it yet, check out the video from Karlsson’s injury and let us know your thoughts in the comments!