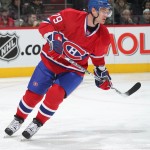 Sidney Crosby wasn’t the only important player to his team to miss a significant amount of time. Montreal made the playoffs last season and is currently sitting outside the East playoff bubble. The senior leader of the defensive corps Andrei Markov will undergo a minor surgery on his knee and will miss about three weeks in addition to the time he has already missed, Canadiens general manager Pierre Gauthier said yesterday prior to taking on Los Angeles.

Markov, 32, had been cleared for contact several weeks ago and there was speculation and anticipation that he might return this week during the team’s California road trip. Markov has not seen game action in more than a year because of knee surgery and has played only 52 regular season games the past two seasons. When ever he returns, look for him to be paired with sophomore P.K. Subban to form the top defensive unit.

He will be an important boost to a struggling power play unit. They have the seventh-highest payroll in the league according to Capgeek.com and have the NHL’s 26th-best power play. Combine that with sitting 11th in the conference and a 21st ranking with 2.46 goals per game, the seat is getting hotter for bench boss Jacques Martin.

With firings this past week in Washington, Carolina and Anaheim, owners who want to win and win now are losing patience with struggling play and injuries to important players.