Now that the whole Ilya Kovalchuk saga is temporary over until New Jersey figures out another strategy for re-signing the superstar forward, there are quite a few unrestricted free agent’s still out on the market. With teams beginning training camps in about a month, it will be interesting to see what team’s will take fliers on veterans before the season starts due to injuries to signed players or other circumstances.

We all know that Kovalchuk is still out on the market, but there are still several proven players with the ability to get the puck in the back of the net still without a team to call home. Not many of these players will crack the top two lines of a team, but if a GM is looking for a role player to anchor a third line (similar to Mike Modano’s role with Detroit), he should look at the following players:

Stempniak scored 48 points last season with Toronto and Phoenix. He was a trade deadline acquisition and it paid off for the Coyotes. The 28 goals he scored was a career-high.

Morrison didn’t even crack the teens in goals department as he scored 12 last season. He did have 30 assists, which is the most for a remaining free agent not named Kovalchuk. He could be useful for someone lacking set-up men.

Still young at age 24, he was waived by his hometown Sabres after going to arbitration. He’s most likely a fourth-line player who still has ability to get better offensively. The next team he latches onto could make or break his career as he’s at the age where he can still make it in the NHL but his time is running out. 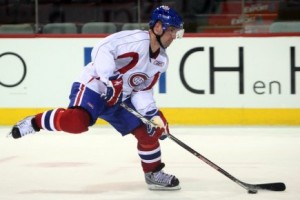 After playing with Montreal last season, Marc-Andre Bergeron is the best UFA on the market.

There’s something the GM’s around the league know that we do not. Bergeron scored 34 points last season  for Montreal but is still on the market. He does have a niche for producing on offense but he is a liability in his own zone. He needs to become better in his own zone to be more successful.

A small defenseman at 5’10” and 192 lbs., Meyer does have good speed and decent offensive skills. He scored 15 points last season for the Islanders. He is an efficient hitter for his size, but it could be his size that keeps him as a fifth or sixth defenseman.

A little over the hill at age 37, Ward stands out among the remaining free agent defensemen as he is the least injury prone compared to guys like Willie Mitchell, Kim Johnson, Paul Mara and Brian Pothier. You won’t see Ward on the scoresheet but he will shut down the attack in his own zone.

Chicago walked away from Niemi’s arbitration award despite winning 26 games for the Blackhawks.

Theodore had his best regular season since he was a Hart Trophy winner and contender with Montreal. He won 30 games for Washington, yet the Capitals served him his walking papers.