Keys To What Could Be Last Game of Season

Tonight is game 6 between the Flyers and Blackhawks. Chicago leads the series 3-2 as they try to win their first Stanley Cup in since 1961 on the road tonight in Philadelphia. Sad to think this could be the last game of the season. But all good things come to an end. If the Hawks can close out the series and claim the first-and only- road win of this Stanley Cup final, the 2010-11 season will begin for the other 29 teams tomorrow morning.

Things aren’t always sunny in Philadelphia for the Flyers. They are the first team since the 1994 Vancouver Canucks to reach the Finals without recording 90 points in the regular season. Let’s go back to the end of the regular season when they had to beat the New York Rangers just to make the playoffs. It came down to a “Win or Go Home” situation for both teams. The Flyers trailed 1-0 heading into the third period before Matt Carle scored a power play goal early in the period to tie the game. Teams remained tied until the shootout, when Claude Giroux scored the biggest goal of the season to get them into the playoffs. Brian Boucher was the goalie that night on April 11.

Boucher played until he got injured against Boston, when Michael Leighton came in, saved the day and helped them get to the finals. Then came along the Chicago Blackhawks, when in game one they scored at will, “Chelsea Dagger” blared throughout the United Center. Now the Broad Street Bullies of 2010 have a goaltending controversy. Both goalies haven’t really gotten the job done, and now head coach Peter Laviolette has remained tightlipped on who will sgtart game six, but expect Leighton to get the start because he’s the one who got them to this point. I feel if they lose, they will lose with who got them there, and thats Leighton. 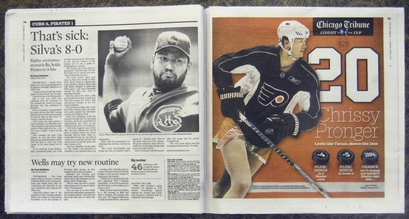 The Chicago Tribune decided to mock Chris Pronger by calling him Crissy Pronger, dressing him in a skirt and saying he 'looks like Tarzan, skates like Jane'. Look for him to lay someone out Kronwall-style tonight.

Tonight’s first puck will drop shortly after 8:00 p.m. Eastern on NBC. If you’re cool enough to live in the northern part of the country, you can watch better commentating on CBC. Before the teams take the ice tonight, here’s what to expect in game six.

Look for the Flyers to win

Every team that has won game four in the finals since the lockout has won the Stanley Cup. If that is the case, look for the Flyers to win at home and steal one on the road in game seven. The key to a seven-game series has always been “protect home turf and steal one on the road”. Well for either team to win, they have to hold true to that, unless Chicago can win at home in game seven. But there’s a small chance for every home team to win a seven-game series.

Chicago has to continue pouring it on Philadelphia with quick goals. Look at the scenarios in this series:

Game 4- Two goals in 3:49 helped make what appeared to be a PHI rout into a one-goal contest

This Stanley Cup playoffs hasen’t featured many multi-overtime games. Can you name how many games have gone past the first overtime this season? Two. They were both in the first round when Boston defeated Buffalo in game four in double OT, and the next day when Ottawa extended their series with Pittsburgh in game five with a  triple overtime thriller on April 22. The last game to go into multi-overtimes in the finals was two seasons ago when Pittsburgh won game five in triple overtime. If you’re a fan of the local news or The Tonight Show, expect it to begin a little later than usual because I sense an overtime game tonight.