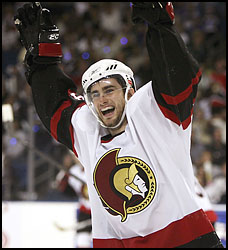 The Detroit Red Wings finally made a dip into this summer’s free agent pool with the signing of right-wing Patrick Eaves to a one-year deal. Terms of the contract were not disclosed.

Eaves scored six goals and tallied eight assists last season with the Carolina Hurricane. Earlier this summer, the 25-year-old was traded to the Boston Bruins for defenseman Aaron Ward. The Bruins then bought out the contract, making Eaves a free agent.

Entering his fifth NHL season, the former first-round draft pick is an excellent skater and strong fore-checker.  In his rookie year with Ottawa, Eaves scored 20 goals in only 58 games. However, his production fell off after a 32-point 2006-07 season with Ottawa. In 85 games with the Carolina Hurricane over the span of two seasons, Eaves only managed seven goals and 19 points. Many critics feel that Eaves still has strong offensive potential that he is yet to display.

After losing key free agent forwards Marion Hossa, Mikael Samuelsson and Jiri Hudler, the Detroit Red Wings were looking for skilled players to fill those voids. With only an estimated $2.5 million available under the salary cap, The Red Wings were limited in their ability to bring in highly skilled free agents. Rumors over the last few weeks have suggested that former Red Wing Jason Williams was on his way back to the club. In fact, Detroit GM Ken Holland confirmed that an offer had been made to Williams, who didn’t seem very enthusiastic to come back to the Wings and opted to field offers from other clubs before committing to the Red Wings. This prompted Holland to quickly move on to other available talent.

With the buyout from Boston, it is speculated that Eaves, who made $1.4 million last season, was willing to take a pay-cut to play with the Wings. Chances are that Eaves signed for $1 million or less. This would potentially leave the Red Wings with another $1-1.5 million to possibly sign another free agent.

**UPDATE** According to Bruce Macleod of The Macomb Daily and Red Wings Corner blog, Eaves’ contract is worth $500,000. This is a steal for the Red Wings to grab a talented young player who is a skilled fore-checker and a responsible player who potentially has a tremendous offensive upside.

With the signing of Eaves, the Detroit Red Wings have $1.18 million left under the cap. GM Ken Holland has stated that the team is looking for another forward to sign. Some sources have suggested that the Wings may try to bring in gritty forward Mike Grier, while others have suggested that Detroit is taking a look at former Red Wing Todd Bertuzzi, who made $1.95 million last season with Calgary while tallying 44 points in 66 games. Bertuzzi played 8 games with the Wings in 2006-07 after being traded from the Florida Panthers.