In a bit of a surprise move, Tour Hockey has launched a new skate line and leading the way are the Tour Volt Kv2 roller hockey skates.

The introduction of new skates from Tour normally wouldn’t be that unusual, but what makes the Tour Volt line, and the Tour Volt Kv2 skates so different is that they will use an all new chassis. Rather than the Hum’er straight 80mm style chassis that has been synonomous with Tour for years now, the new Tour Volt Kv2 roller hockey skates will have a hi-lo 80-80-76-76 setup on their new Fuse split chassis. This is a big change for Tour skates, and with a hi-lo style being the most popular among roller hockey players, this could give Tour an opportunity to grab some market share.

Along with the new Fuse chassis, Tour has essentially developed a brand new performance level skate. It starts with the new Bionik composite quarter package which is designed to provide better energy transfer and wrap around your foot than ever before. The skate is, of course, heat moldable which allows for that extra level of comfort and fit that you’re accustomed to. Matching the Code line of skates, Tour has also included their Instep Honeycomb Venting on the Tour Volt Kv2 roller hockey skates, which increases airflow throughout the boot helping to keep your foot cool.

Moving inside the boot, the Tour Volt Kv2 skates use relay memory foam, which is a proprietary foam blend, to comfortably wrap around your foot and provide a secure fit. A Sensor Fit Pro liner inside the boot will help to wick away moisture but also work to prevent premature breakdown. Up front, the Tour Volt Kv2 roller hockey skates have an Accu-Aire lightweight tongue. This blend of felt and foam helps to prevent lacebite, absorb impacts, and improve airflow.

Heading beneath the boot on the Tour Volt Kv2 skates you’ll find an injected plastic outsole. Mounted to that will be the Tour Fuse alunimum chassis containing two 76mm wheels in the front, and two 80mm wheels in the back. This split setup is familiar to those of you who use Mission or Bauer skates. The Tour Volt Kv2 roller hockey skates will come with Kemistry Cyclonium wheels which are spinning on Bevo Gold 9 race rated bearings.

Overall the Tour Volt Kv2 offer an awesome blacked out look along with some pretty solid components and a new hi-lo style chassis, all for a price of only $299.99. If you’ve been eyeing a new pair of performance level skates that won’t break the bank, you might want to check out the Tour Volt Kv2 roller hockey skates.

If you’re interested in grabbing a pair of the Tour Volt Kv2 skates, visit our friends over at Inline Warehouse to get yours today. The skates are shipping for free, and will begin arriving April 8th. 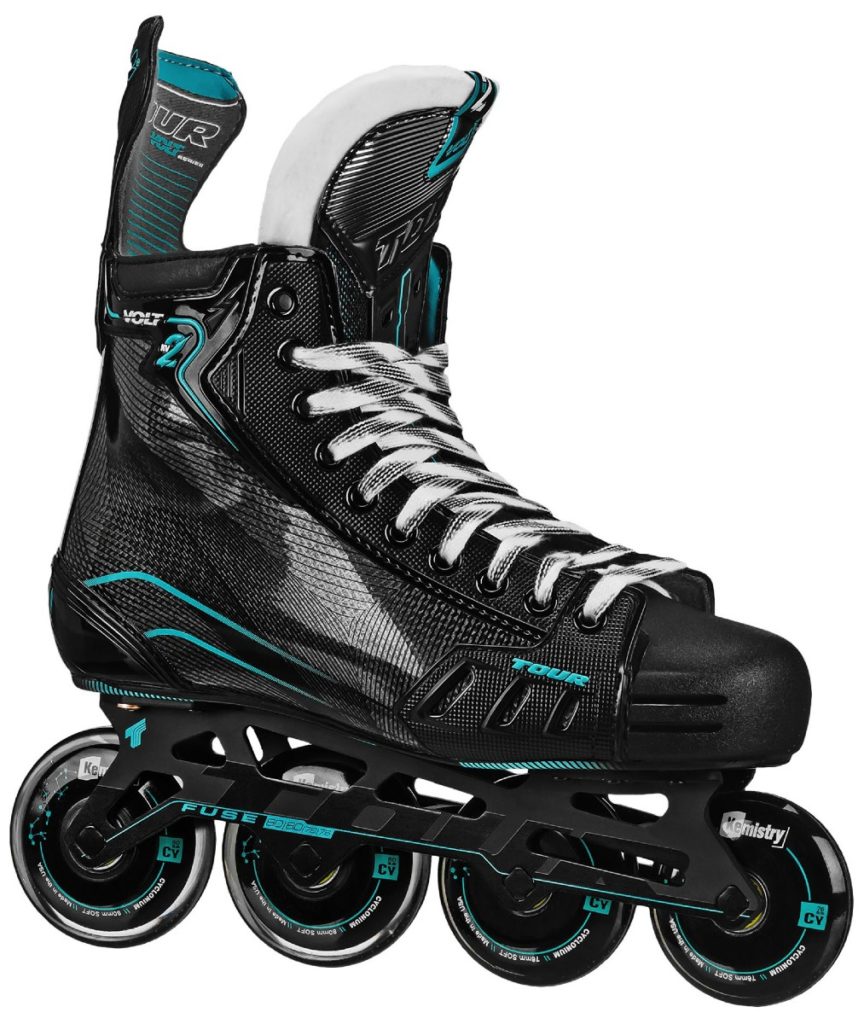