Oilers looking to lock up Connor McDavid for 8 years, $106 million 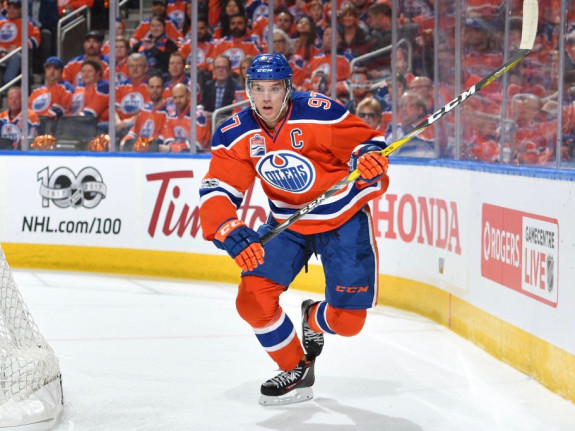 While the Edmonton Oilers can’t officially sign superstar forward Connor McDavid to a contract extension until Saturday, the team appears to already have a deal in place that would put the face of their franchise in elite company with players like Jonathan Toews and Patrick Kane.

Sportsnet reported earlier this week that the Oilers and McDavid have agreed to terms on a contract extension that will dole out $106 million over the course of eight years—averaging out to a $13.25 million cap hit annually.

That would be the highest salary cap hit of any player in the NHL.

The 20-year-old McDavid has one year remaining on his entry level contract, so his extension won’t kick in until the 2018-19 season.

The Oilers also have Leon Draisaitl to sign, who is set to become a restricted free agent July 1, but made it clear that McDavid is their first priority.

“The order of events, we can’t officially sign Connor until July 1, but it’s going to be Connor and then Leon,” said Oilers General Manager Peter back in May.

McDavid led the NHL with 100 points this past season, including 30 goals and 70 assists, and won the Hart Trophy as the most valuable player. He also won the Ted Lindsay Award as the top player in the league as voted by the players.