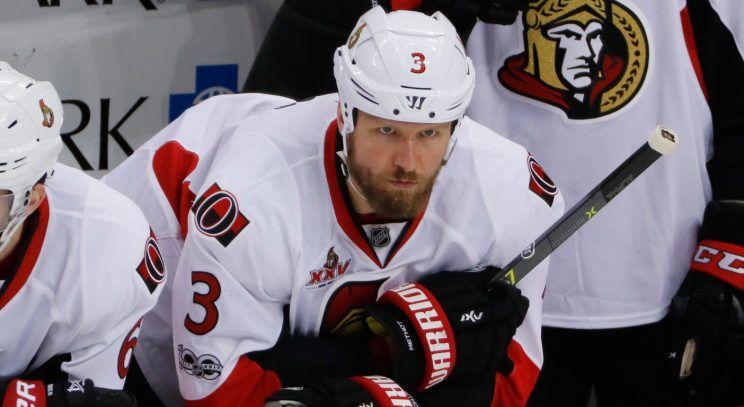 It’s been a busy week for Marc Methot.

The 32-year-old defenseman was selected by the Vegas Golden Knights from the Ottawa Senators during last week’s Expansion Draft. The Golden Knights then flipped Methot to the Dallas Stars in exchange for goalie prospect Dylan Ferguson and a second-round pick at the 2020 NHL Draft.

“He was a guy that we had kind of targeted if he had become available he’d be a good fit for us,” Stars general manager Jim Nill said. “We’d been talking through [the 2017 draft in Chicago on Friday and Saturday] and the last couple days, and it came to fruition today.”

“He comes in and fills that void we’ve been looking for,” Nill said. “We were looking for a veteran presence, a stabilizing player. He’s been through the League and just went to the third round of the playoffs. He’s going to help our young defensemen, and it’s going to create competition with our group of players. In the end, it’s about having the best players on the team you can to win.”

Methot had a no-trade list of 10 teams, which the Stars clearly weren’t on.

“He’s very excited,” Nill said. “He did have his no-trade teams and stuff, and that’s a bit of the exciting part, knowing that we are becoming a destination for players. Players think enough of our team and our coaching staff that they want to be part of the team we’ve got building here.”