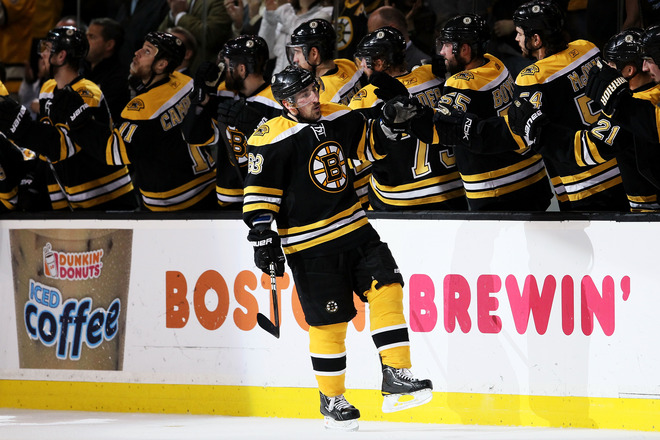 The Boston Bruins will find out what, if any, disciplinary action will be taken against Brad Marchand on Thursday. The timing of his hearing is not ideal, just hours before a crucial game against the Ottawa Senators that could decide who the Bruins face in the first round of the playoffs.

Marchand was given a 5+game penalty on Tuesday night in the home victory over the Tampa Bay Lightning. While the Bruins have now qualified for the playoffs, Thursday’s game is vital for seeding and they would love to have Marchand available to play.

The NHL Department of Player Safety tweeted today about the news, adding Marchand will have his hearing on Thursday, and a decision will be made on the day. With the uncertainty surrounding his lineup, Coach Bruce Cassidy will have to create two game plans and two sets of lines for Thursday’s crucial clash, taking into account the possibility that Marchand will not be available.

As for the incident itself, Marchand started by being hit himself, Jake Dotchin the culprit, hitting Marchand with his stick in front of the Lightning goal. It was clear Marchand did not like the poke, although it did not seem too hard on the replay, and delivered one of his own back at Dotchin, a shot which caused Dotchin to collapse to the ice in pain.

The bad news for Marchand is that he has already been suspended by the league three times previously, along with a host of fines for other wrong doings. This will certainly count against him and because of that I am expecting to see him come away from the incident with a small ban. The positive news for Marchand is that Dotchin managed to return and finish off the game and this is always a good sign when it comes to a potential suspension.

It would seem that the Bruins fans out there need to prepare themselves for a game or two without Marchand. While that will hurt them, they are in the playoffs so as long as he is back for the first game I don’t think they will be too concerned. We will see what tomorrow brings, but my guess is that he will receive a one or two game ban for his actions on Tuesday night.