When we think of The Great One, we think of him winning Stanley Cup rings with Edmonton early in his career. We also think of him and The Trade to Los Angeles, making Hollywood a hockey hotbed and scoring goal #802. Younger hockey fans may think of him reuniting with Mark Messier in the twilight of his career in New York. 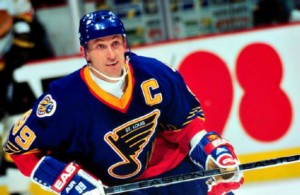 What many people may not remember (Unless you’re a Detroit Red Wings fan) is that in the second half of the 1995-96 season he played 31 games for the St. Louis Blues, scoring 37 points and taking them one goal away from appearing in the conference finals for the first time in 10 seasons.

The Blues appear to be pretty generous when calling up former players to play in the game. Gretzky played 31 games in the blue sweater while goaltender Martin Brodeur made seven appearances and five starts before deciding to retire midway through the 2014-15 season. He currently serves as assistant general manager for the Blues under Doug Armstrong.

The New Years Eve showcase will begin at 1:30 p.m. and will consist of three 20-minute periods with a running clock and two 12-minute intermissions. Chicago has yet to announce their roster.

As of today on StubHub, tickets are still available for the Alumni Game at a reasonable price.