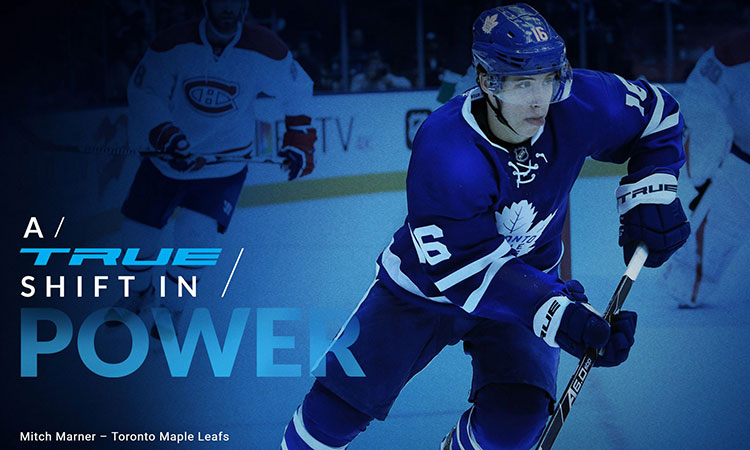 One of our favorite hockey gear brands, True Hockey, announced today that they have added another young and talented NHL player to their list of signed athletes. Mitch Marner, of the Toronto Maple Leafs, will join players such as Mathieu Perreault, Alex Tanguay, Zemgus Girgensons, and Nick Bjugstad.

Marner made the Maple Leafs opening night roster this season after failing to do so last year. He was the #4 overall pick in the 2015 draft and signaled he had no intentions of going back to juniors after torching the OHL for 39 goals and 77 assists, good for 116 points in only 57 games played last season.

With a True Hockey partnership, we will continue to see Marner line up with his True A6.0 SBP stick each night on the ice.

For more details on Mitch Marner signing with True Hockey, check out the press release below.

Under the multi-year partnership, Marner will use TRUE hockey product and be one of the centerpieces around a youth movement in TRUE Hockey’s sports marketing efforts, including sitting on the TRUE Hockey Players Advisory Board where he will have an active voice in providing feedback for new product lines going forward.

“Mitch is one of the most decorated players in CHL history, and we could not be more excited to welcome him to the TRUE team,” Jeremy Erspamer, President and CEO of TRUE Hockey said. “TRUE hockey is the fastest growing company in hockey and it is only fitting that we align our brand with players who fit that same career trajectory. We look forward to having Mitch represent our family of high performance products and maintaining an active voice in product testing and marketing initiatives going forward.”

“I’m excited to be part of the TRUE Hockey family. They are a young, dynamic company that value quality and performance above all else. As a player, we want to know there is something behind the product we use. With their background designing and manufacturing for other brands along with what I have seen since being introduced to the product, I can say I’m a firm believer in their technology and their ability to continue to innovate and bring product that will help me maximize my performance on the ice. It is really neat to feel a part of building something as well, they really value the opinions of their players”, Marner said.