Hockey fans around the world have been mourning the death of Hall of Famer Gordie Howe since his death was announced last week. Today fans got the opportunity to pay their respects at Joe Louis Arena to the legend one last time.

In Detroit over the last week, there has been a growing movement among Red Wings fans to get the organization to change the name of the upcoming Little Caesars Arena to Gordie Howe Arena. Let’s pump the brakes there.

Professional sports is a multi-billion business that is no more than a toy hobby for those with more money than we can ever dream of. Owning a sports franchise in the top North American sports is much different than running your mom and pop sporting goods store down the street. Owners may blow hot air and tell you they bottom line depends on wins and losses. This isn’t European sports where we see top sports teams enter Administration (Glasgow Rangers FC) or simply shut their doors and fold (Hamburg Freezers). If there’s an opportunity for an owner to make a buck or save a buck without spending their own, he’s doing to do that. Which is why almost every sports venue in the country has two things going for it: paid with public/taxpayer funds and has some kind of corporate sponsorship tied to the building and just about anywhere you can put up a sign.

I could be here all day long talking about whether or not it’s worth having the taxpayers forking over millions of dollars to build a new shiny arena when that money can go towards better roads, schools, and public services. But I’ll let John Oliver do the talking. Back to the issue at hand. Little Caesars Arena is projected to cost approximately $627 million. The Detroit Downtown Development Authority, who will own the arena once completed received $650 million in funding to build the arena and the surrounding entertainment district. Of the $650 million, $285 will come from public funds. Of the remaining private funds, $125 million will be paid over 20 years for Little Caesars Pizza to have their name on the arena. Sure, it’s basically one of Mike Illitch’s companies funding the other, but that’s how business is done today in professional sports. He has the opportunity to have the Little Caesars brand plastered around the world every time the Red Wings play a home game or when a NCAA tournament game is played. No one outside of the Original Six cities and Canada knows (or cares) who Gordie Howe is, but they know when you hear Little Caesars you think of a Hot-And-Ready pizza. Fans complain when owners make sketchy deals with local governments to bankroll their playpens and also complain when stadiums change names from classic names to corporate names that usually change hands every 7-8 years. You can’t have it both ways. 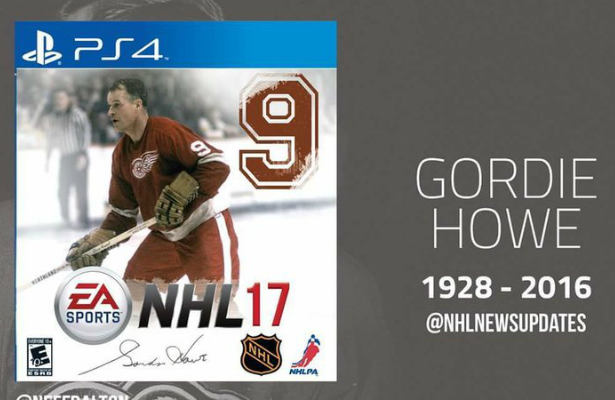 As for Howe, he already has a bridge coming with his name on it if it ever gets built. As for the petition to get his name on the upcoming NHL game? Fine by me. If you forgot, Vladimir Tarasenko and Joe Pavelski are the finalists for the NHL 17 cover vote. The winner is supposed to be announced next week at the NHL Awards, but if Pavelski and Tarasenko want to concede the result to get Howe on the cover, that will be commendable of both of them. If this petition get’s any real traction is still to be determined, but it does have 8,442 signatures of the 10,000 needed as of the time this is being written.