Will Tampa Bay trade Stamkos if he’s not re-signed? 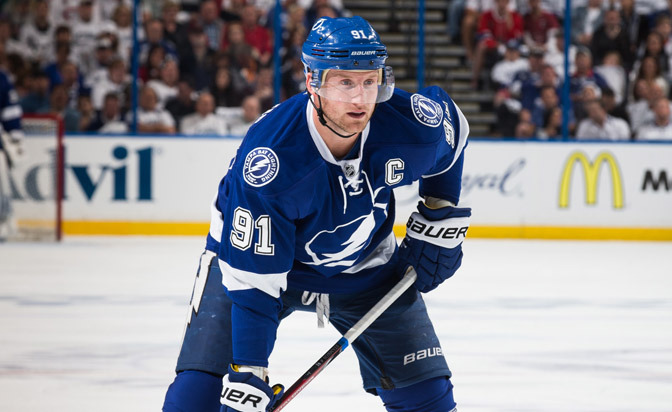 The Tampa Bay Lightning will have some tough decisions to make in a few months if star center and franchise cornerstone Steven Stamkos hasn’t re-signed with the team.

The 25-year-old, who was drafted first overall in 2008 by the Lightning, is in the final year of a five year, $37.5 million contract. For the first time in his career, Stamkos is eligible for free agency should he remain unsigned by the Lightning when July 1, 2016 hits, and a large contingency of fans think (and hope) that he will sign with the Toronto Maple Leafs—his hometown team.

Adding fuel to the fire that Stamkos is as good as gone are persistent rumors of a rift between himself and head coach Jon Cooper, and the fact that the Lightning are currently outside of a playoff spot after advancing to the Stanley Cup Finals last year.

Regardless, Stamkos maintains that he wants to stay in Tampa Bay.

“Like I’ve always said, I envision myself winning a championship here and want to do that,” Stamkos told the Tampa Bay Times last week. “Obviously we got close last year, and I’m the captain of this team and I want to be that leader.”

“I think obviously the people who know me and are close to the situation know what’s true and what’s not true,” he added.

Still, if Stamkos remains unsigned by the Feb. 29 trade deadline, then general manager Steve Yzerman has a tough decision to make.

To trade or not to trade?

Stamkos himself has said that there is a lot of time left between now and the trade deadline for both sides to reach an amicable agreement. But, if it becomes apparent by the trade deadline that a contract extension will not happen, then Tampa Bay may have no option but to trade Stamkos to try to get something in return instead of losing him for nothing.

Complicating things further is the fact that Stamkos has a no movement clause in his contract, so Yzerman would need Stamkos’ approval to waive the clause before being dealt. Even then, Stamkos would likely submit a list of destinations he would approve a trade to—which likely means a contender.

Detroit has been mentioned as a possible destination in the rumor mill (likely by Detroit fans…), but the return might be too great—especially if Stamkos doesn’t re-sign. No way will the Red Wings give up a young player like Gustav Nyquist, Tomas Tatar or Dylan Larkin for a potential playoff rental—even if it is Steven Stamkos.

That, in a nutshell, is the main issue plaguing a Stamkos trade at the deadline. The cost. It’s not unreasonable to expect a roster player, a prospect, and a draft pick or two to go in exchange for Stamkos. Granted, Detroit is in the middle of a changing-of-the-guard and isn’t willing to part with their up-and-coming talent. Another contender, say Washington or Montreal, might be willing to mortgage a bit of the future to win now.

A player like Steven Stamkos doesn’t hit the free agent market often, making him a unique and highly intriguing case. Should Tampa Bay struggle to lock him up long-term, could he be traded? If so, what will it cost in return and is anyone willing to pay that premium? Stamkos is a game-changing talent for sure, but as a playoff rental, many teams might not be willing to pay the asking price.

Besides, it’s all speculation at this point. Only one person truly knows what he wants to happen, and that’s Steven Stamkos himself. And at this point, it looks like Stamkos is more than willing to listen to what Tampa Bay has to say.

steven stamkosTampa Bay Lightning
← Previous Story Tampa Bolts Home Even with Detroit
Next Story → Is All Star Dylan Larkin a contender for the Calder Trophy?