Last week according to 27East.com,  Avery was charged with fourth-degree criminal mischief and two counts of seventh-degree criminal possession of a controlled substance. The criminal mischief comes from police receiving reports he was allegedly throwing objects at cars as they were passing by.  When they stopped him and investigated, they found Avery was in possession of acetaminophen with oxycodone and roxicodone.

The 35-year-old was arrested at the scene and taken to Southampton Village Police headquarters where he was released on $500 bail and was issued a ticket to appear in court at a future date.

Avery’s lawyer, Edward Burke, Jr., spoke to the New York Post and added that Avery, “has prescriptions for the medications that were the basis of this charge.”

Other media reports say that Avery lives in the Hamptons, where the arrest occurred and has been an outspoken advocate against drivers who speed near his time.

Avery is also scheduled to get married to model Hilary Rhoda this weekend in the Hamptons. 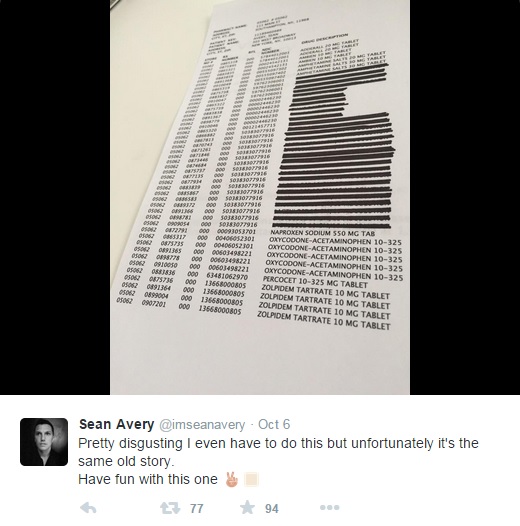