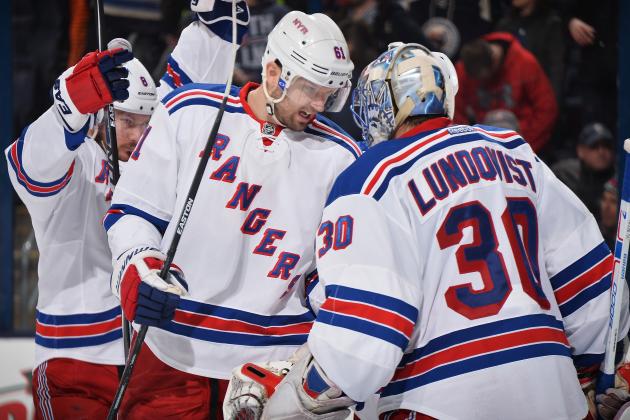 Are the Rangers a legitimate contender entering the 2015-16 NHL season?

I mean, I say legitimate because, in this age of unparalleled parity across the league, it’s tough to count out any team on any given night—and especially throughout the course of a seven-game playoffs series. But the Rangers have been flirting with the ultimate prize for several seasons now, making it to the Stanley Cup Finals two years ago and losing in the Eastern Conference Finals last season (after amassing a 113 points to capture the President’s Trophy). They have the goods, but are they good enough?

A lot of that hinges on the performance of Rick Nash. Forty-two goals last season was a career-high, but a meager five goals in 19 playoff games was a disappointment. He essentially cut his goal-scoring pace in half, going from a .53 goals per game (GPG) pace in the regular season to .26 GPG in the playoffs. Unfortunately, this was the second consecutive postseason where Nash’s production dipped dramatically. In 2013-14, he only managed three goals in 25 games—or .12 GPG.

Definitely not what you expect from a guy carrying a $7.8 million cap hit each season.

Trade rumors hit hard over the summer with many believing Nash was on his way out the door at the NHL Entry Draft. Those rumors proved not to be true, and if the status quo holds true for the next month, Nash will begin the season as a Ranger. It’s anyone’s guess whether he will end the season as a Ranger, however…

This team has quality pieces in place. Their defense was one of the best in the league last year and will certainly be again this year. King Henrik remains one of the best—and most consistent—goalies in the game, and we’re all excited to see what Keith Yandle can do in a full season with a (ahem) good team. The loss of Martin St. Louis will be a big blow, and someone will need to step up and replace his 21 goals and 52 points, but this is a team poised for another solid season.

Solid, yes. But I’m just not sure if I’m ready to put my money on the Rangers hoisting the Stanley Cup next June…