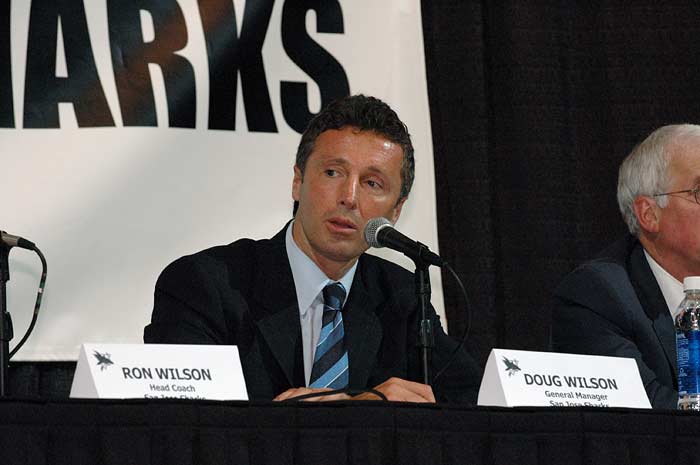 San Jose Sharks owner Hasso Plattner doesn’t speak to the media often, so when he’s available, the questions come in a flurry.

The Sharks announced an agreement on Friday to keep the team at the SAP Center through 2025, and Plattner was on hand to discuss the agreement and the state of the team. Notably, reporters were eager to get his thoughts on the Sharks’ struggles, as this is the first season the team has missed the playoffs since the 2004-05 lockout.

“I understand that fans want to win, but they don’t play. And we — ownership, management, even coaches — don’t play,” said Plattner. “Only the players play and it is tough. There are 29 other (teams) and they want to win.”

One of Plattner’s most interesting answers came when reporters asked about General Manager Doug Wilson, who has struggled to cultivate a real Stanley Cup contender.

“Doug was not on the ice when we didn’t make it, when we didn’t win one in eight home games…,” Plattner said, perhaps indicating that certain players on the team should be held accountable for their lack of effort instead of Wilson. Joe Thornton has regularly been targeted for his lack of leadership and his struggles to be an effective postseason player.
“We will do the best, Doug is sharing with me what is on the market. In the end…it is his job to do these negotiations, find us the players. You know, as everybody knows, we need a defenseman or two, and we need probably a better fourth line. Then we will have a good team again.”
Plattner was specifically asked about an incident earlier this season between Wilson and Thornton.
“I’m not commenting on who made the bigger mistake,” Plattner said, “but I think they both realized it and settled it as hockey players. I can tell you or what I know from both that it’s over.”

The Sharks finished 12th in the Western Conference with a 40-33-9 regular season record. Wilson and head coach Todd McLellan already mutually agreed to part ways at the end of the regular season, making finding a new head coach the team’s priority this spring. It’s been rumored that former Pittsburgh Penguins head coach Dan Byalsma, who led the team to a Stanley Cup championship in 2009, could be in the running for the San Jose bench job.