Don't Miss
Home / News / Mike Babcock on his way out of Detroit?

Mike Babcock on his way out of Detroit? 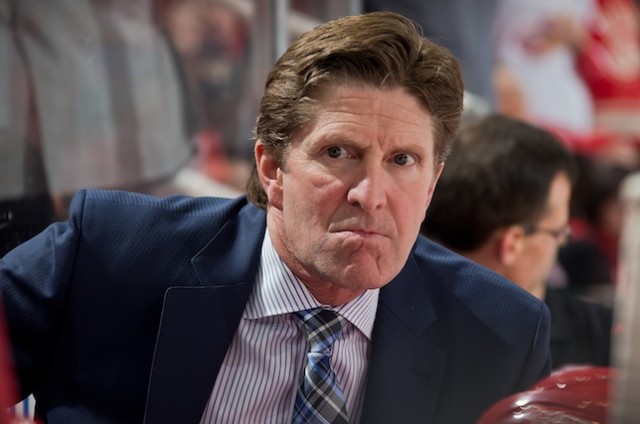 It appears as though Mike Babcock’s days as the head coach of the Detroit Red Wings may be numbered.

According to Ansar Khan of MLive.com, the Detroit Red Red Wings have granted Babcock permission to speak with other teams.

“Babcock will be going to the World Championships in the Czech Republic this weekend. He’ll likely speak to several general managers there,” MLive reported today.

“Toronto, Philadelphia, Buffalo and San Jose have coaching vacancies. Edmonton has an interim coach in place (Todd Nelson). Other teams, like Pittsburgh and St. Louis, might make coaching moves if Babcock is interested. Babcock’s contract with the Red Wings expires on June 30 but the club needs to have its coach in place well before that.”

Holland says RedWings have made two offers to Mike Babcock, over past week, Babcock said he would like to explore possibilities.

Ken Holland: "If there is better situation out there for Mike Babcock, he's earned right to" explore that. Wings still interested.

Holland: By end of May, hoping to have a decision from Mike Babcock. IN meantime, Mike and I will continue to stay in contact.

If Babcock chooses to leave Detroit, they Red Wings may look to current Grand Rapids Griffins coach Jeff Blashill. He previously won a Calder Cup with the Griffins and prior to that coached at Western Michigan University.

The Red Wings may also look outside of the organization for their next coach.