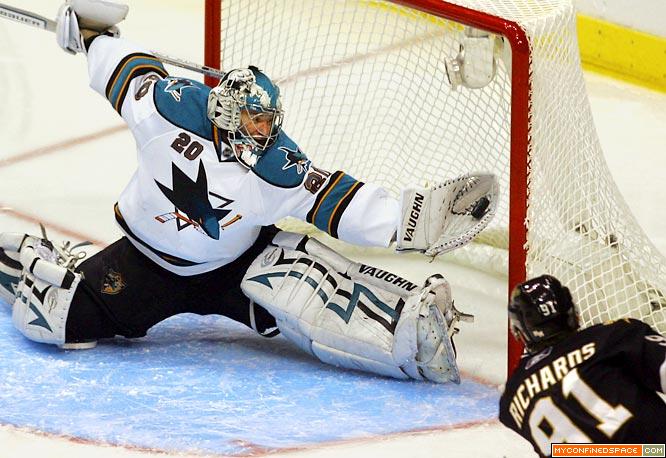 Long-time San Jose Sharks goalie Evgeni Nabokov saw his career come full circle today as he announced his retirement from the NHL at a press conference at SAP Center in San Jose.

“The circle is coming to an end and I’m happy to retire as a Shark,” an emotional Nabokov said.

Nabokov spent the first 10 seasons of his 14-season NHL career with the Sharks, the team that selected him in the ninth round of the 1994 NHL Entry Draft. He won the Calder Memorial Trophy as the league’s top rookie after winning 32 games in 2000-01, and led the league with 46 victories in 2007-08.

In all, Nabokov won 293 games in a Sharks uniform—a franchise record. He also holds franchise records in games played (563), saves (13,463), save percentage (.912), and shutouts (50). During his career with San Jose, the New York Islanders and Tampa Bay Lightning, Nabokov won 338 total games.

Nabokov’s career with the Sharks almost didn’t happen, he told NHL.com in 2007. At the time when he was drafted by the Sharks—something which he read about in a Russian newspaper—he was content playing hockey for Russia’s Moscow Dynamo, the team he grew up cheering.

“To be honest, it was more my parents’ decision whether to let me go or not,” Nabokov told NHL.com, admitting he was close to not coming at all. “I was thinking that way. But we made a decision and said, ‘OK, we’ll give it a try.'”

After struggling to adjust to the smaller North American rink size and a different style of play in the American Hockey League, nabokov contemplated bailing on the NHL again.

“I wasn’t happy the way everything was happening, and then one time coach said, ‘You are playing today,’ in the morning, and three hours later he came to me and said, ‘You are not playing,'” Nabokov said. “That’s when I was like ‘OK, maybe it’s time to go back home,’ and I said goodbye. But I had a really good friend helping me a lot, Anna [Gorouven], and we sat down and I told her what I was feeling and I was [upset] and said, ‘I’m going to go back home. I enjoyed my time at home, my career was good.’ But she said, ‘You came here to reach certain goals and maybe you should be more patient.'”

Nabokov’s patience paid off. He retires as number 18 on the all-time NHL win list and number 17 in shutouts.