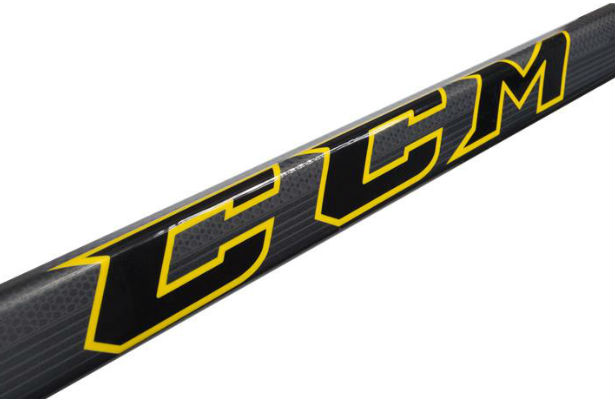 One of the most exciting releases of hockey equipment this summer was the return of the Tacks line from CCM. Along with the skates, CCM also released a brand new Tacks stick. This stick would take on a mid-kick flex profile, giving CCM something for everyone throughout their stick lines.

We were fortunate enough to receive a CCM Tacks stick from the manufacturer to put through the paces and review. It’s been a great few months using it, and we’ve put together our thoughts in the full review below.

CCM opted for a somewhat familiar color scheme with the Tacks stick. Unfortunately, that familiar color scheme is from the Bauer Supreme line. The differences are substantial enough, however, with the Supreme being more of a gold color with CCM Tacks having a brighter and bolder yellow which really pops against the black throughout the shaft. Overall, it features a really great look and makes the stick easily recognizable on the ice.

As I mentioned earlier, the CCM Tacks stick was designed with a mid-flex profile. It’s built with a fused construction, rather than being a true one piece, which provides great strength and stiffness in the lower hosel area. The shaft is also constructed with round corners and straight sidewalls.

The grip coating on the Tacks stick is subtle, and borderline perfect in my opinion. It’s a subtle texture which isn’t overly grippy, and helps provide a great feel.

The blade was constructed using CCM’s AttackFrame structure which features a stiff outer frame with two reinforcing bridges that run through the center, from the heel of the blade to the toe. Inside the blade CCM has used lightweight internal foams in order to decrease weight and improve puck feel.

From the time I took the Tacks stick out of the box, I thought it had a great feel to it. It was light weight, around 430 grams, and seemed to be quite well balanced. Just holding the Tacks stick in my hands got me pretty excited to take the stick out on the ice.

Once I got on to the ice with the Tacks stick, I was amazed by the puck feel. The incredible feel that it offers is honestly one of the best features about it. My confidence during play was immediately boosted because of this. The feel overall is head and shoulders above many of the previous sticks I have used. It really is that good.

In the past few months of using the Tack stick, I have been quite impressed with its shooting ability. Compared to other mid-kick sticks on the market, I really think the Tacks has been my favorite to shoot with. Shots seemed pretty effortless, and the 85 flex shaft loaded up well on snapshots, wrist shots and slap shots.

My shots with the Tacks stick always seemed to respond exactly how I expected them to, which was a great feeling. When I really wanted to get a quick and fast shot off to hit a hole the goalie was quickly closing, I was able to produce exactly what I wanted.

The accuracy of my shots also seemed to improve with the Tacks stick. I found that after starting to use the Tacks, my goals per game average jumped a ton. In fact, I can say that in every one the games I played using the Tacks I scored at least one goal. I was really impressed with this streak and can attribute a lot of it to the accuracy and shot of this stick.

The biggest problem I usually have with incredible performing sticks, like the Tacks, is that they never last long enough. However, through a couple months of solid usage, I’ve been pretty happy with how the Tacks has held up.

The most notable damage to the stick so far as been a cut on the face of the blade. I think it came from a skate blade during a game, but can’t be certain. I initially thought this cut was a crack in the blade, but it has not grown at all, and instead remained the same since I first noticed it.

Other than that, I have only noticed minor dings or paint chips on the stick which are pretty normal for any stick I’ve used, so it’s no surprise to see it here. The stick doesn’t seem to have lost any of its flex or pop, nor has the blade become soft. All things considered, it has been holding up quite well.

From my experience over the past few months, the CCM Tacks stick has been one of the best hockey sticks that I have ever used. It very well could have the best puck feel out of any stick I have used as well. I look forward to using the Tacks each and every game in order to see what else I can do with it, and the results have been pretty outstanding.

Beyond the incredible puck feel that the Tacks stick offers, shooting with the stick is awesome too. It provides a nice and easy shot, with solid accuracy on top of that.

If it’s not clear enough, I would have to say that the CCM Tacks stick is the best stick I have used so far this year. I’m unbelievably impressed with what CCM has done, and I’m really not sure they will manage to improve upon this hockey stick. If you haven’t used one of these sticks yet, it’s about time you tried one out.

Interested in purchasing the CCM Tacks stick? Head over to Ice and Inline Warehouse where you can grab one today for only $259.99!

Have you used the CCM Tacks stick? Leave a comment below with your personal review and experiences with the Tacks stick!