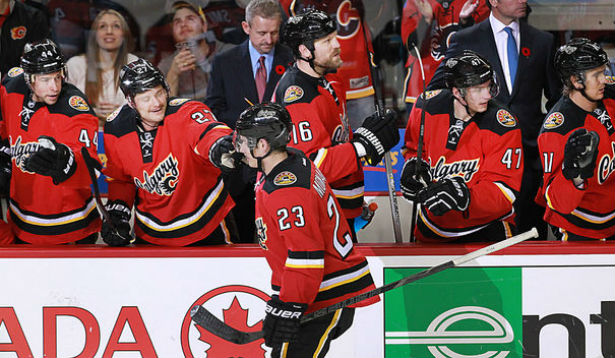 The Calgary Flames have been disappointing the past few years, after managing to miss the playoffs for five consecutive seasons. Calgary had an average offseason, losing key players, but managing to pick up a few free agents to fill in holes in their roster. But once again, Calgary’s success this season is uncertain, and they may even see themselves at the bottom of the West once again.

Calgary has one of the hardest working offenses in the NHL; their work ethic is without a doubt their greatest strength. Overall, offense really isn’t Calgary’s strong suit. The Flames finished 23rd in the league in scoring last season with 2.46 goals per game, and were ranked 24th on the power-play. And it will be even more difficult for the Flames to improve this year with a weaker roster.

Calgary’s roster is really going to miss Mike Cammalleri, who led the team in goals scored with 26 goals. With Cammalleri heading to New Jersey, the Flames will lose some major scoring power. Jiri Hudler will have to put in a lot of work this season to make up for Cammalleri’s absence, since only a few big name forwards were acquired in the offseason. Last season Hudler lead the team in points (54) as well as assists (37).  However, Hudler would have to post even bigger numbers this season, in terms of goals and assists, or a win for Calgary will be very hard to come by.

The addition of some forwards over the offseason will help take the pressure off of Hudler. The Flames added Mason Raymond, Devin Setoguchi, and Brandon Bollig over the summer. Each forward will be able to contribute a few points here and there, and these players could possibly be dealt again before the trade deadline for early draft picks; either way picking up these players is a win for Calgary.

Although Calgary’s offense is struggling, there are some reasons for optimism. Last season, rookie Sean Monahan scored 22 goals, making him the second highest goal scorer on the team. Monahan is expected to be one of the top scorers on the team once again if he can avoid the sophomore slump that plagues many young players.

Last season Calgary’s defense struggled with the absence of captain and defenseman, Mark Giordano, due to injury. But with Giordano hopefully playing a full season, Calgary’s defense looks like it will improve this season. Despite only playing 64 games, Giordano was the most solid blue liner in Calgary, averaging over 25 minutes of ice time per game, and finishing the season with a +/- of +12. Giordano will once again be the core of the Flames’ defense and a huge factor on the blue line.

Over the offseason, Calgary acquired former Penguins defenseman, Deryk Engelland. Engelland will add some much needed toughness to Calgary’s defensive pairings, but at price. The Flames signed Engelland to a three year contract worth $8.7 million.

Calgary’s defense worked hard last season, and managed to keep over half of their games played within one goal. With an extra push from coach, Bob Hartley, Calgary’s defense could be the deciding factor of their success this season.

Karri Ramo gave Calgary a great run last season, posting a 2.65 GAA and a .911 SV%, but isn’t quite ready to be Calgary’s number one goaltender. This season, Calgary brought in veteran goaltender Jonas Hiller. Hiller will be out to prove that the Ducks were wrong to replace him with younger talent, and the completion with Ramo will put Hiller on top of his game.

This change up in goaltending is very welcomed in Calgary, where the Flames were one of the worst teams in goal last season. With more strength in net, the Flames may be able to hold on to one goal games this season, and avoid overtime and shootouts, areas they are extremely lacking in.

Calgary’s offense is still much too weak to pull off a playoff run. Right now, it looks like Calgary will be one of front runners in the Connor McDavid lottery; which is better than nothing.