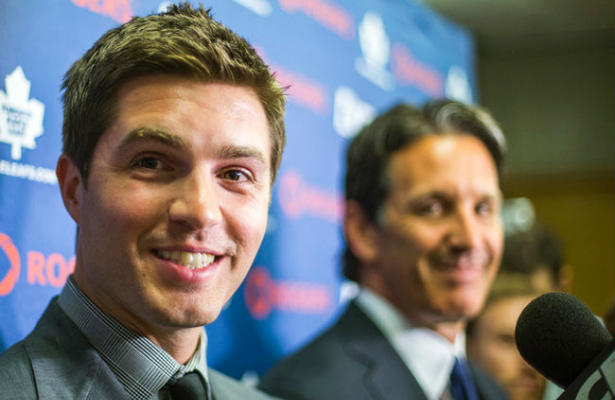 The following is a guest post from JP Nikota who currently covers the Leafs for PensionPlanPuppets.com.

If you are mathematically literate and a Leafs fan, the team’s 2013-14 slip from playoff contention came as no surprise. In fact, with roughly Grade 9-level math competency, the Leafs’ collapse was painfully predictable. Puck possession was the Leafs’ main problem in 2013-14, and those who got aboard the “advanced statistics” bandwagon were all too well aware, even if they weren’t altogether certain how to change that fact.

The outlook on the Leafs’ 2014-15 season seems to hinge on exactly the same question, though this time around, there appears some room for cautious optimism. Kyle Dubas, the young champion of advanced stats (though more importantly, the former GM of the Soo Greyhounds), has been hired by the Leafs as Assistant General Manager, and he has wasted no time in setting up an analytics department that includes now-former-blogger Cam Charron of sites such as Puck Daddy and The Leafs Nation; Extra Skater founder Darryl Metcalfe, and former blogger Rob Pettapiece. The question facing Leafs fans is this: how much of a difference will it make?

The good news? We’re already seeing results. The bad news? They might not be enough. Let’s take a look at the areas of improvement and stand them back-to-back against areas of weakness.

Strength: The analytics team having input on player usage

Taking up roster spots with one-dimensional players like Colton Orr or Fraser McLaren is one thing (see next section) but there are many other ways that advanced stats could help the deployment of players.

We should all resign ourselves for now to Tyler Bozak continuing to be a part of the top line with Phil Kessel, but until the Leafs find a centreman to provide some balance to the lines, he’ll have to do. In other words, yes, Nazem Kadri is definitely the superior player, but concentrating all the Leafs’ firepower on one unit is easy to shut down. So what other kinds of changes might we expect?

One thing to watch for is that Dion Phaneuf is likely to see a dip in his ice time and some easier minutes with regards to his offensive zone start numbers, which will hopefully mean something of a rebound in his possession stats, which have dropped off dramatically under Randy Carlyle’s watch in Toronto.

Playing 3rd or 4th line players for 20 minutes a night (à la Jay McClement) is hopefully also a thing of the past. Line matching is one thing, but it’s tough to win when your least-talented players are on the ice more than any others.

Leaf management’s obsession with ‘truculence’ has dragged on nearly six full seasons (since the start of Brian Burke’s tenure) but it seems to be coming to a merciful end. Enforcers Fraser McLaren and Colton Orr still have contracts with the organization, but are likely to find themselves on the outside looking in once the regular season starts, as many new depth forwards have been brought in in an effort to make the Leafs’ 4th line competitive. It may be that either one of them still gets a handful of games here and there, but we definitely won’t see two-goon lines playing 2 minutes a night anymore, and that’s great news for people who like to watch hockey.

How much of a difference a 4th line who plays 10 minutes instead of 2, 4, or even 6 depends on the players coming in, and there is some reason to believe that the upgrade is significant. Leo Komarov, Mike Santorelli, Daniel Winnik, Matt Frattin, and David Booth all represent massive upgrades on the likes of Orr and McLaren, and should be able to free up the team’s top two lines for more offensively oriented assignments.

Several of the above-mentioned players have the potential to score, and will likely get auditions on the top six as injuries mount mid-season, though it’s debatable whether any of them will match the production of the departed Mason Raymond, or the defensive acumen of advanced stat favourite Nikolai Kulemin.

Strength: The assistant coaches are different

This statement has to be accompanied by a giant “but” in that Randy Carlyle is still very much at the helm. It’s hard to say what kind of impact new coaches Steve Spott and Peter Horachek can have, but it seems logical that if they were put in place by management that Brendan Shanahan & Co. would be adamant that their opinions were heard.

For Leafs’ fans who watched their team struggle to break out of their own zone, recover pucks, or run a successful penalty kill, the bright side is that things can’t get much worse than they were last season.

Trading Carl Gunnarsson (plus a pick and salary retention) for Roman Polack is definitely a move that made the Leafs weaker. It’s not to say that Polack can’t make a meaningful contribution to this team, but if fans expect him to be a defender who can line up in the top 4 of a competitive team, they’ll probably be disappointed.

The free agent signing of Stephane Robidas was met with some optimism. He has, after all, shown fairly well by advanced stat standards, and former coaches and teammates have nothing but good things to say. On the other hand, he’s 37 years old, broke his leg twice last season, and is under contract until he’s 40. The player himself thought his career was over until the Leafs offered him a contract. Oh, and he won’t be healthy in time for all of training camp. If the Leafs are hoping he’ll bail them out next season, things could get ugly.

It’s true that Morgan Rielly and Jake Gardiner still have some growing room, but it’s unlikely that between last season and this one that there will be enough improvement between them to raise the entire efficiency of the Leafs’ D corps. Rielly looks like he’ll be a great defenceman, but his time to lead has not yet come.

It’s hard to say how much Carlyle will change this off-season. He knows his job is on the line and while he may be somewhat more open to altering his strategies, it’s hard to know for sure until the team has played a few regular season games. Will the 4th line be once again sent out after every goal against? Will Carlyle fixate on another player as much as he did McClement and over-use him? Will wingers drift hopelessly deep in the defensive zone in a “swarm” defence? Will there be better neutral zone back-side pressure?

Shanahan is indeed the new sheriff in town, but it’s hard to see Carlyle changing all his coaching philosophies over the course of one summer.

Weakness: The Leafs will find it difficult to improve

The Leafs have a pile of players who are unlikely to perform up to the standards that their contracts would suggest. David Clarkson is the obvious example, but Komarov’s contract is a big one for a player of his ilk, and that’s saying nothing for Bozak, or even Phaneuf. Robidas could quickly turn into a cap anchor, making things even worse. Moreover, the team will carry over in excess of $1.5M in cap overages from last season, buyouts, and salary retention. In short, their cap situation is bad and this makes it difficult to improve.

Building a team via free agency is difficult, since UFAs command such large prices, and the Leafs are a long ways from being able to add a significant player that way. A trade is also equally difficult to orchestrate for the same reasons. In short, after having lost/given away perhaps even more talent than they have acquired this off-season, things look grim for the foreseeable future.

Does the outlook have to be so grim?

Look, maybe Carlyle has turned a new leaf, and maybe the assistant coaches help the defence and penalty killing a lot. Maybe Rielly and Gardiner really do improve a lot and lead the team. Maybe with the help of the new analytics department players are used to their full potential and the team’s possession numbers start to turn around. Maybe Jonathan Bernier and/or James Reimer hoist this team on their backs and carry it through a weak Eastern Conference to the playoffs.

There are reasons to believe that things in Toronto are getting better, and Leafs fans should be excited about the new direction their team has taken, but it’s going to take more than one summer to undo nearly a decade of mediocrity.