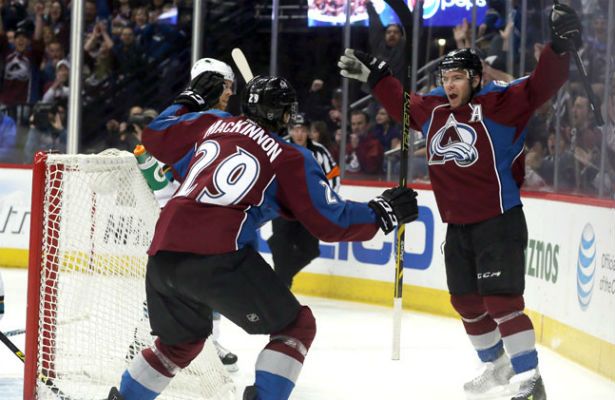 A new coach and a number one draft pick was all it took for the Colorado Avalanche organization to do a 180. Over the course of the 2013-2014 season the Avalanche went from one of the biggest losers in the league to a major playoff contender. But can Colorado do a repeat performance and qualify for the playoffs two years in a row?

Colorado’s biggest advantage in terms of offense is their scoring depth. Nathan MacKinnon, Ryan O’Reilly, and Matt Duchene are three big centers, and three big scoring threats. All three centers are incredibly versatile and account for a huge amount of Colorado’s offensive success.

Matt Duchene lead the team in overall points, posting 23 goals and 47 assists, for a combined total of 70 points. Duchene is an incredibly consistent player and should have no problem posting big numbers again this season. The addition of veteran center, Danny Briere, ensures that Colorado will be a team that is able to score this year.  Although Briere doesn’t always post huge numbers in the regular season, his ability to make plays and dominate in the post season will be invaluable to the Avalanche.

Nathan MacKinnon won the 2014 Calder Trophy, and with good reason. In his rookie season, MacKinnon was a staple in the Avalanche’s offense producing 63 points over a full 82 game season. If MacKinnon can avoid a sophomore slump, then he could once again be one of the top scorers in the Avalanche line up and a big factor in their success this season. With the absence of Paul Statsny in the lineup, MacKinnon has a greater opportunity to step up and take over scoring chances this season.

Not only is Colorado stacked with centers, they also have considerable depth in wingers. Gabriel Landeskog and Jarome Iginla are two notable examples of Colorado’s depth on the wings. Colorado has enough depth and quality players to form strong lines that extend beyond their top six players.

Last season, one of Colorado’s biggest weaknesses was defense; Colorado had one of the weakest blue lines in the NHL. This season won’t be any different. The Avalanche’s defense was constantly being bailed out by goaltender, Semyon Varlamov, and if Varlamov’s numbers aren’t consistent this season, the Avalanche will be in a lot of trouble. On average, the Avalanche allowed approximately 33 shots per game, one of the worst records in the Western Conference. If the Avalanche want to see any improvement in their defense, they will need to put more pressure on shooters and not allow easy shots on goal.

The addition of Brad Stuart will help add some experience to the blue line, but Colorado’s defense as a whole will remain unaltered, and many of Colorado’s mistakes from last season are expected to be repeated.

With Colorado’s major scoring depth and quality roster, it would be surprising to see them miss the playoffs this season. A major factor in their success will be Varlamov’s goaltending, as well as their defensive development. Colorado’s defense is going to have to get better and keep up pressure during goal deficits if the team wants to be a regular in the playoffs.