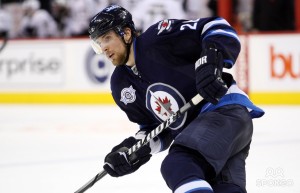 Blake Wheeler is expected to lead the Jets in points this season. He’ll make a good third round pick in your fantasy league.

Last season saw two versions of the Jets. The first half under Claude Noel, and the second half under coach Paul Maurice. If anything this season resembles how they performed under Maurice, they should be better than one of the bottom feeders in the West. Unfortunately they will likely struggle to make the playoffs this season based on the mass exodus of departures and what was acquired to replace them. They now appear to setup their roster to be young and build for the future.

What is promising is the Jets return nine of their top 10 scorers from last season. Jokinen was the only one to depart, and that continuity will help them going forward as Maurice enters his first full season. The right wing spot on the top line was flexed between Blake Wheeler and Michael Frolik last season. If the season started now Wheeler will have the nod but expect Maurice to switch things up and go to Frolik if Wheeler’s name isn’t finding the score sheet early on.

Perreault is now on his third team in the last three seasons. He comes to Winnipeg from Anaheim, where he posted NHL career-highs in goals, assists, and points. Expect him to start on the third line with Carl Klingberg and Dustin Byfuglien. Yes you read that right, expect Byfuglien to spend more time up with the forwards rather on the blue line.

Despite being in the most difficult division in the NHL, the Jets have several players worth taking in your fantasy team including Wheeler, Byfuglien, Evander Kane, Bryan Little, and Andrew Ladd.

The defense has to find a way to play better with fewer bodies and less talent at the top if Byfuglien spends more time with the forwards. They were 22nd in goals allowed and if they want to make the playoffs they must find a way to at least be in the top half of the league.

Their top defensive pair is projected to be Tobias Enstrom and Zach Bogosian, which could be the weakest top pairing in the league. Enstrom was the top point earner among the defensemen last season with 10 goals and 20 assists.

Playing as a rookie last season, Jacob Trouba scored as many goals as Enstrom and had one less assist and point. He proved last season he can step up to the top pairing if anything happens to Enstrom or Bogosian. Troubla is expected to be paired with Mark Stuart, who led the team in plus-minus at +11.

One promising area for the Jets is their penalty kill. They ranked 10th in the league last season with 83.2 percent.

What makes you scratch your head is that Al Montoya arguably played much better than Ondrej Pavelec last year but they let him walk into free agency for free. There are 29 goalies who have played over 100 games the last three years and Pavelec was statistically among the worse. They are taking a huge gamble relying on him without a solid backup. Michael Hutchinson is expected to backup Pavelec but he’s unproven at the NHL level.