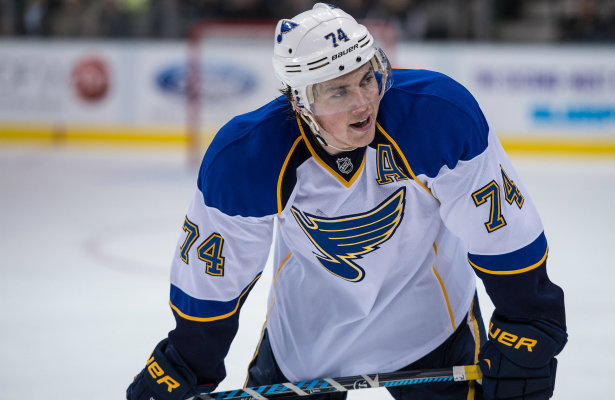 The St. Louis Blues have been a contender for a few straight years now. Despite all of their skills and abilities, it has not translated to a Stanley Cup championship, or even a Western Conference championship. Instead, the talented Blues teams have continued to play the role of upset victims after premature playoff exits. In 2014-15, the odds will again be in favor of the Blues making a run, but will they have what it takes to finish it out?

As an offensive unit, the St. Louis Blues remain strong and one of the premier units in the league. They will have a great amount of talent on the top two lines, but also feature enough depth to continue to be dangerous all season long.

Alex Steen completed a major breakout season last year by tallying a career high 33 goals in only 68 games played. Steen has been plagued by injuries and concussions throughout his career, but he’s coming off of an incredible season, and expectations will be high for him to continue where he left off. He will likely see action this season playing with David Backes and T.J. Oshie, and should make for quite a threat again this year.

In the off season, the Blues managed to add Paul Stastny to their roster through free agency. Stastny, who was one of the top players last season for the Avalance, will immediately jump in as one of the teams top two centers. Stastny is an immediate threat for another 20 goal season, and should compliment Vladimir Tarasenko and Jaden Schwartz nicely if he is paired with them.

Speaking of Tarasenko, the Blues are entering the season with high expectations of the third year winger. If he bumps his production once again this season, he could easily be on the realm of 60 points throughout the season.

The Blues were also able to retain the services of Steve Ott by signing him to a short term deal this summer. Ott came over from Buffalo, along with Ryan Miller, but ended up being the only one to stick around. Ott will add some veteran leadership and depth to the Blues squad, as well as a bit of grit down in the line up. Players like Ott will be important to the roster come playoff time.

Finally, St. Louis should see some additional production from the depths of their line-up with Jori Lehtera joining the squad. Lehtera was drafted 65th overall in the 2008 draft, but instead went to the KHL for four seasons. During his time in the KHL, Lehtera even skated will Tarasenko, so look out for some potential chemistry to form there once again. Lehtera lead his KHL team, Novosibirsk Sibir, in assists and points last season. He finished the campaign with 12 goals, 32 assists and 44 points, and should be a welcome addition to the Blues roster.

On the back end, the Blues will be led by Jay Bouwmeester and Alex Pietrangelo. These two ate up a healthy number of minutes last season and finished the year a combined +46. Those are the kind of numbers you want leading the way on the blue line, and the Blues are happy to have this duo returning.

Kevin Shattenkirk and Barret Jackman will also play their fair share on the blue line, with Shattenkirk spending some quality time on the power-play as well. Jackman, on the other hand, should see more time killing penalties.

Carl Gunnarsson, who was signed as a free agent this summer from Toronto, will likely see time on the third defensive pairing for St. Louis. He’s currently getting treatment for some hip issues, but will likely be ready to go once the season starts.

The biggest change this season for the Blues should fall between the pipes where Brian Elliott is set to take over the starting role. A couple years of tandem operations between Elliott and Halak will no longer be an option after the Blues traded Halak to the Sabres last season for Ryan Miller. The experiment with Miller proved to not work out, so the Blues are back with Elliott to start the 2014-15 campaign.

Elliott posted very strong numbers once again last year including an 18-6-2 record, 1.96 goals against average and .922 save percentage. He also included 4 shutouts among those wins. As Elliott’s workload is expected to increase this year, I would expect to see his numbers decrease slightly. However, he should still continue to be the rock in net that the Blues are counting on.

Backing up Elliott this season will be Jake Allen, the Blues 2nd round draft pick in 2008. Allen managed to see ice time in 15 games last season where he went 9-4. His numbers weren’t anywhere near Elliott’s, but as is the case with all backups, he’s going to work hard and try to earn himself a starting job.

The expectations are high, once again, for the St. Louis Blues. Simply making the playoffs will not be enough, and fans are eager to see this team do big things. I’m certain that the players are hungry for it too. However, playing in the Western Conference and Central Division will have its drawbacks once again for the Blues. Despite their talented roster, they are not a lock for the number one seed in the West, and will have to do battle with Chicago in order to earn that.

When the season draws to an end though, I fully expect the Blues to cruise into the playoffs. How far they make it will still be up in the air. If Elliott has another tremendous year between the pipes, and the new pieces to the puzzle fall in place, it could be a very big year in St. Louis.