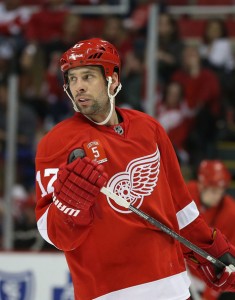 New addition David Legwand could be the veteran presence the Senators need on offense.

The Senators are a ship without a captain. Jason Spezza was traded to Dallas after one season as captain. Daniel Alfredsson is long gone. Ales Hemsky also went to Dallas as a free agent. With those two gone, the Senators lost a lot of their scoring from last season and what they were hoping to have going into this season. As for who can step up? We won’t really find out until training camp is over.

Head coach Paul MacLean has a difficult challenge ahead of him. While he did get Alex Chaisson and David Legwand over the summer, they don’t provide the offensive spark and energy Spezza brought to the table. MacLean will lean heavily on Kyle Turris and Bobby Ryan for offense. Last season they ranked 11th in the league in scoring, but you can be pretty certain they’ll be lucky to break into the top half of team scoring this season. On the power play, they were tied for seventh in power play goals with seven other clubs. But when comparing their power play goals home vs away, they were the second-best team on the power play away from Canadian Tire Centre but at home they were a putrid 11.8 percent on the power play. That’s a statistic that has to change heading into this season.

The only sure thing on the blue line is Erik Karlsson. Karlsson is so good he is the favorite to lead the team in points this season. Which isn’t something you usually see from a defenseman. Their defense was among the worse in the league last season and not much was done to improve upon that. On the penalty kill, the Sens have to do a better job of staying out of the penalty box. While their penalty kill rate was 22nd at 80.9 percent last season, they allowed the second-most power play goals (61) and was shorthanded the most number of times (320).

Goaltending is the one area where the Senators are most stable and secure. They have both Craig Anderson and Robin Lehner signed to long-term contracts for years to come. The job heading into camp will belong to Anderson, but expect Lehner to challenge for the starting position.

If you’re looking for an underdog to watch this season, follow the Sens. If they are sniffing a playoff spot in the last 20 games they have overachieved. Most likely they’ll be in the conversation for the No. 1 draft pick than in a playoff race. Unfortunately for MacLean, we see him as being one of the first coaches fired this season.