Why Gustav Nyquist won’t get Rookie of the Year consideration 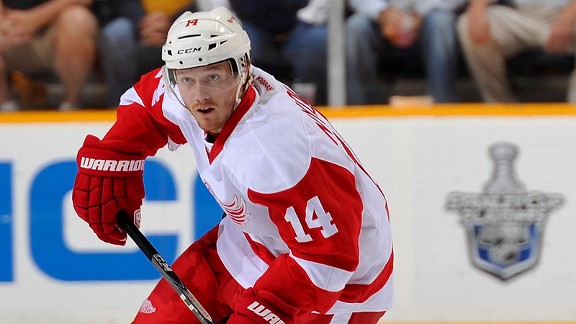 While Tyler Johnson and Ondrej Palat, both of the Tampa Bay Lightning, will both get Rookie of the Year consideration when the NHL awards come around in June, the honor will most likely go to Colorado Avalanche rookie Nathan MacKinnon, who currently leads all rookies with 23 goals and 55 points, and is a big reason for the team’s success and almost guaranteed appearance in the postseason. But there’s one rookie in the league who probably deserves the honor more, but won’t even be part of the conversation.

At 24-years-old, Nyquist is probably the best rookie the team has had in more than a decade. He currently ranks first on the team in goals with 25, and fourth on the team in points with 42. Probably not super impressive until you consider that Nyquist has done all that in just 47 games. At this point, he is putting up numbers similar to Henrik Zetterberg, who leads the team with 48 points in just 45 games. To further put it into perspective, not only does Nyquist’s 25 goals top MacKinnon’s 23, but MacKinnon has played in 72 games this season – 25 less games than MacKinnon.

Sure, you can make the argument that MacKinnon is only 18 and contributing at this high of a level while Nyquist has had plenty of time to develop over the last several seasons with the Grand Rapids Griffins, the AHL affiliate of the Detroit Red Wings. While that may be true, it’s arguable that Nyquist’s controbutions are more meaningful to the Red Wings, who are currently struggling to keep their name in the playoff picture. Nyquist has been a big reason over the last few weeks why the Wings are still clinging to the 8th seed playoff spot in the Eastern Conference. His play has been incredible as of late, with eight goals over the team’s past five games. He continues to show why he belongs in the NHL and has been a bright spot for a team decimated by injuries to many of their best players.

Regardless, Nyquist won’t be in contention for Rookie of the Year honors this summer. Despite meetin the age requirement, stating that any Rookie of the Year must be 26-years-old or younger, he remains disqualified based on another stipulation. According to NHL rules:

To be eligible for the award, a player cannot have played more than 25 games in any single preceding season nor in six or more games in each of any two preceding seasons in any major professional league.

Unfortunately, this puts Nyquist out of contention due to the fact that he played in 22 games with the Red Wings last season and 18 games the previous year.

In a breakout season for the kid who has admirably helped fill the shoes of superstars like Henrik Zetterberg and Pavel Datsyuk while they have been out with injuries, Nyquist has been a breath of fresh air for fans. While he may not get mentioned in the same breath as MacKinnon, Johnson and Palat for Rookie of the Year honors, he will certainly be a staple of the Red Wings’ lineup for years to come.