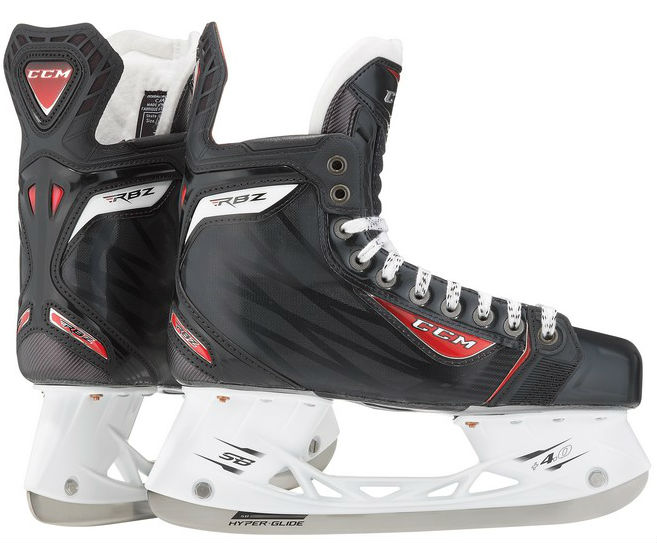 CCM Hockey has steadily been improving their game over the last few years. The U+ CL skates were another move in the right direction, and were followed by the RBZ stick which has been lighting lamps since its introduction. However, with a lot of hype surrounding CCM’s RBZ skates before they were launched, would the product be able to live up to its expectations? Fortunately, CCM Hockey sent us a demo pair to review. Read on to see how we think the CCM RBZ skates perform in a competitive skate market.

CCM has often maintained simple designs for their skates. Recently, the model seems to be a primarily dark boot with red and white accents. They continued that tradition with the RBZ skates, making the boot all black, except the accents. There’s a reason why CCM hasn’t strayed far from this model though – it’s because it works. The RBZ skates have an excellent look and appeal to them, despite not being overly flashy.

The design isn’t the only thing about these skates that is solid, however, as the boots also seem very well constructed despite being made in Thailand. While I think it’s a downgrade, compared the the U+ CL which were made in Canada, they still seem to hold their own. The RBZ skates are plenty stiff for a top end boot, although it’s definitely not the stiffest that we’ve seen. It’s not necessarily a bad thing though, as stiffer is not always better. It certainly depends on each skaters personal preferences.

A new addition to the skate this year are the custom support footbeds. While it’s definitely not a brand new innovative feature that marketing can throw a bunch of buzz words around, it’s definitely an important inclusion for CCM. Stock footbeds are typically, for lack of a better word, crap. For CCM to spend the resources on these custom footbeds shows a lot, and proves that they are taking even the small things seriously.

CCM also spent a lot of resources developing their new holder and steel for the RBZ skates. We’ll touch on these more later on in the review, but we’re pleased to see this adjustment. CCM’s engineers and designers are definitely trying to make an impact and gain a bit of market share and it really shows.

From the time I began playing ice hockey, I have been a fan of CCM skates. The fit of the CCM V08 skates were nearly perfect for my foot, and baking the U Foam only made it better. The last on the skates seemed to be adjusted for the U+ CL series, however, and they became a bit too narrow for my liking. It seems that more tweaks have been made to the last for the RBZ skates as well, but for the better in my opinion.

One of the biggest changes made with the RBZ compared to their previous models is in sizing. What was once a 9.5, now becomes a size 9. You can expect to fit into an RBZ boot about a half size smaller than what you’re typically used to. So for me, having fit into a size 9.5 in CCM skates before, the size 9 demo we received offered the perfect fit.

Additionally, the RBZ skates are going to provide a medium-high volume boot, along with a medium ankle area. They have widened the forefoot area in the RBZ skates, and have provided a medium toe box. Baking the skates will of course help to minimize any hot spots, and provide a more customized fit for your foot.

When I first tried the RBZ skates on, the experience was very reminiscent of trying on those V08 skates. The RBZ’s immediately felt great, despite coming right out of the box. The addition of the medium support footbed and baking have yielded even better results. These skates are extremely comfortable. 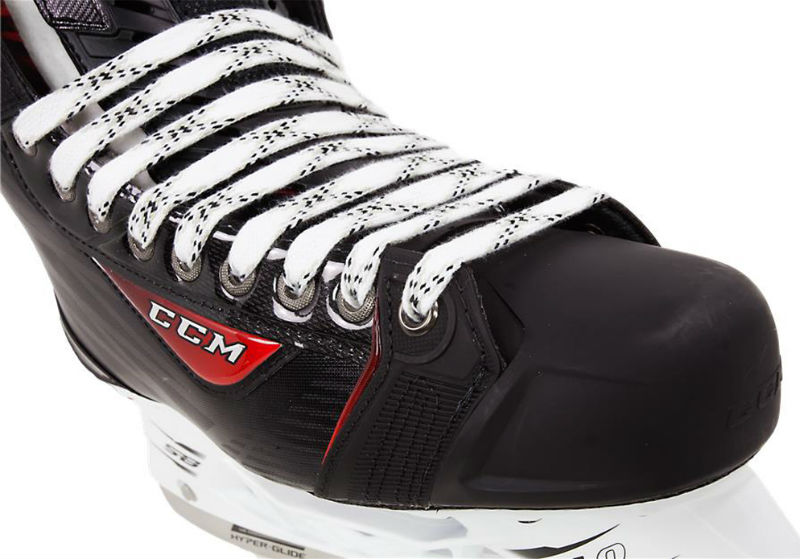 While an additional four millimeters added to the holder may not seem like a big difference, you will definitely notice it. I expected to be able to  step on to the ice and immediately perform in these skates, but there was definitely an adjustment period.

The changes to the holder and steel resulted in some uncomfortableness on my part during warm ups. I had to make small tweaks and adjustments to my stride and skating style throughout warm-ups in order to get more comfortable moving around the ice. And, while I had a pre-game warm up to figure things out, it definitely wasn’t long enough. It still took an additional 10 or so shifts to really have things figured out. By the third period of my first skate with the RBZ’s, I reached a point where I was completely comfortable with them. My best recommendation to avoid this is to wear the skates to an open skate or a practice before taking them to a game situation – which most of you will undoubtedly do anyway.

Part of CCM’s marketing campaign surrounding the RBZ skates involves the “strap a rocket to your feet” catchphrase. While I’m definitely aware of the marketing efforts there, I have been pleasantly surprised with how quick I actually am on these skates. There have been a few instances now in the RBZ’s where I’ve been in a flat out sprint as I back check or try to pull away from a defender on a breakaway. In most instances, I have felt quicker on my feet in these skates than some of the competitors I’ve used. Whether this can be attributed to the skates, or if its just in my head, is another story. But the feeling of being able to catch someone that I don’t believe I should have has hit me more than a few times with the RBZ’s.

In terms of forward flex and energy transfer, I think you’re going to get about what you expect out of these skates. The carbon composite outsole provides good energy transfer, but if you’re coming from another high end skate, you will not notice a difference. You will, however, if you’re making the jump from a lower end skate. In terms of flex, I’ve been pleased, but again it performs as expected. The boot is not too restrictive, and allows for good movement all around.

One of my quirks is that I like to leave the top eyelet open to allow for a bit of extra forward flex when I skate. However, when I did that, I felt that the boot was a bit too loose around my ankle. To rectify the situation, I laced all the way up and didn’t over tighten at the top. If you have similar quirks, you may find a different lacing style to be appropriate as well.

CCM’s RBZ skates utilize a full clarino liner inside, which is not only soft and comfortable, but does a great job of wicking away moisture. The liner, combined with an air vented outsole, have done a great job of keeping the boots try. Sure my feet sweat during games like anyone else, but the liner is definitely on the dryer side after a good skate. This also helps to make maintenance a bit easier as I’m confident the inside of the skates will dry quickly and not cause any damage.

While I haven’t had to block any shots with the RBZ skates yet, thankfully, there have been a handful of passes I’ve been able to knock down with my boot. The amount of protection they provide in those types of situations has been good. The tongue also provides additional lace bite protection which has come in handy. Initially, I wondered if the boot might be a bit low on the volume side for my foot, but I have yet to have any issues with lace bite. 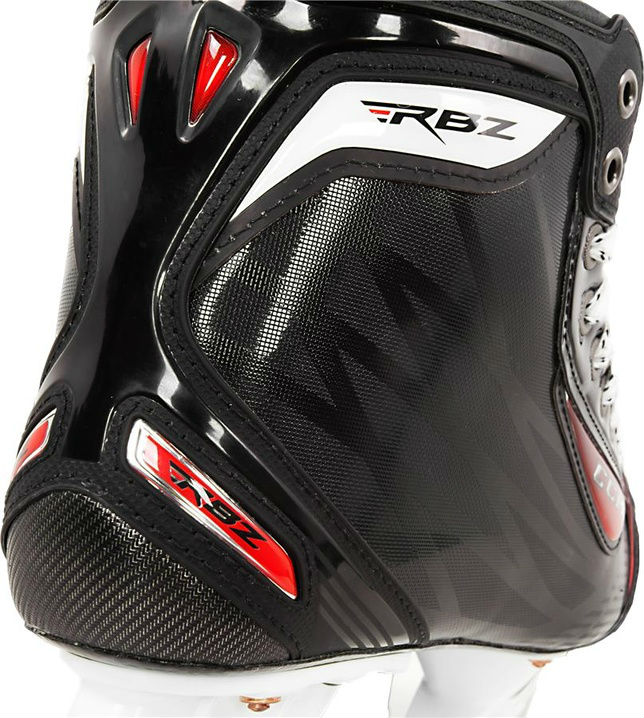 As hockey equipment manufacturers such as CCM are able to pack more and more features into their products, the consumer sees the prices on those top end products continue to rise. Competitors have seen their top end prices rise to $800 or $850, but CCM comes in at a comparatively modest $749.99 for the RBZ skates. While it’s still shelling out a lot of money for skates, the top end performance you’re getting out of the RBZ skates comes at a relatively good value.

The value CCM has provided, in addition to the good looks and great performance, make this skate a true contender in the marketplace. It’s also a pair of skates that you should strongly consider if you’re in the market for an upgrade this coming season.

If you are looking to upgrade and want to check out a pair of CCM RBZ ice hockey skates, head over to IceWarehouse.com. As I mentioned, these new jets will set you back $749.99. If you’re ready to take a look or order today, click here to head to IW and check them out.

Have additional questions about the RBZ skates, or want to share your thoughts or your own review? Drop us a note in the comments or send a tweet to @hockeyworldblog or @matthwb.