We are at the end of the 48-game sprint known as the 2013 NHL season. Just about every team had to deal with a roller coaster season. And because of the shortened season, playoff spots and positions came down to the final day of the season for most teams as well as the Sunday rescheduled game between Ottawa and Boston. This was also the first season since 1996 that every Original Six team made the playoffs. It was so long ago that Toronto was still playing in the Western conference and Maple Leaf Gardens, Winnipeg Arena and The Spectrum were still active NHL venues.

13 games were played on Sunday, which meant that most teams had something to play for. I would love it if in future seasons the NHL would have all 30 teams play on the last day of the season. This is similarly seen in soccer where everyone plays at the same time. This leads to a lot of scoreboard watching if your team is playing for the Presidents Trophy, a division title or even a playoff position.

Starting tonight,  be prepared for two months of playoff hockey just about every night. I can guarantee you there will be a few classic games played that will have fans talking for many years. 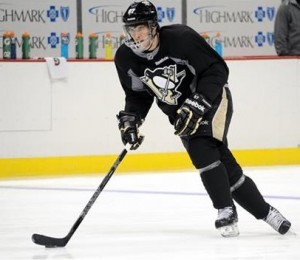 Sidney Crosby skated in practice Monday and is expected to play in the first round against New York. (AP Photo)

1. Pittsburgh (LW: 1)- The Penguins end the regular season atop of the Power 5. They will also get Sidney Crosby back for Game 1 against the Islanders. Look for this team to be hungry while playing in the playoffs. They have the best depth of any team, as well as acquiring Brendan Morrow and Jarome Iginla strictly for one purpose: to win the Stanley Cup.

2. Washington (LW: 3)- The Capitals should be lucky they played in a weak division. Any other division and they would have been the No. 6 seed in either the East or West. But you can’t control who you play and they took care of business by finishing the regular season 8-1-1. Alex Ovechkin looks to have found his scoring touch as he won the scoring title. While the goaltending has been solid as of late, it’s the area that could be of concern going into the playoffs.

3. Chicago (LW: 2)- Best record in the league. Fewest goals allowed. Second-most goals scored. They haven’t had much to play for as of late but they still manged to put on a solid performance entering the playoffs. If they don’t win the West, everything they accomplished in the past four months will all be for nothing. They are the sexy pick to meet Pittsburgh in the Final, but as well all know someone will rise and pull off the upset.

4. New York Rangers (LW: 4)- At the NHL trade deadline on April 3, the Rangers sat outside the playoff picture. Then they dealt Marian Gaborik and rallied with a strong season finish with three regulation losses in their final 14 games. It wasn’t the regular season the franchise and team expected, but it could be erased with a strong playoff performance. I don’t see any reason why they shouldn’t beat Washington in the first round.

5. Detroit (LW: NR)- Last year Los Angeles didn’t lose in regulation over their final six games to earn the eighth seed in the West. This year the Red Wings finished 4-0-1 over their final five games to earn the No. 7 seed. And for the Red Wings every pointed counted as Minnesota and Columbus were in a dogfight for the final playoff spots in the West. If there’s any low seed that can pull off an upset, it’s the Red Wings. This team may not be the Detroit teams of the past, but they do have players that can become household names should they win in the first round.