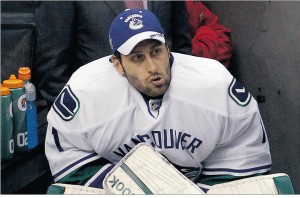 With the NHL and the NHLPA agreeing to a new collective bargaining agreement, hockey fans across the globe are happy. For those who missed hockey in part because they’ve missed the competitiveness, trash-talking, of their hockey pools, below is some information to help you win this year’s pool.

Those who looked into their crystal balls and predicted a lockout and decided to hold off on their fantasy draft, you may find yourselves scrambling to prepare for the beginning of the season. To help, Primepucks offers a draft guide for a special Lockout price of $6.99. The guide provides a comprehensive look at drafting strategies, NHL team analysis, forward tiers, defensemen tiers, goalie rankings and then their preferred players to get as well as those to stay away from. I really like the team breakouts that shows players’ positions, age, years in the NHL, those who will become free agents at the end of the season (those who typically work harder for a bigger pay check), as well as points and goals. Even for those who have already finished their draft, it is a nifty little guide that provides in-depth information that can truthfully help you make better decisions throughout the season.

While the schedule has yet to be completed, there are a few things to consider. For those teams who own their building that they play in, they will have greater flexibility in scheduling games. This would allow them to better space out home and away games, and most likely cut down on a lot of travel that wears on the team. Teams like the Toronto Maple Leafs may find it a bit more difficult as they already have their rink committed to other events like concerts, which may find them playing two games at home, traveling for one, coming back and doing it all over again.

With a shortened training camp, expect coaches to put more trust in veterans than in rookies. While Nail Yakupov is an excellent player, the Edmonton Oilers cannot risk waiting on him to adapt to their system. Rookies, for the most part, will see less ice-time.

No position is harder than playing goalie, especially when they are not NHL ready to play. Injuries will be a concern, so expect the normal workhorses like Pekka Rinne to rest a bit more than usual. This also means that backup net-minders should see more playing time which may be a good usage of a roster spot.

Speaking of goalies, Roberto Luongo is still with the Vancouver Canucks despite tons of trade rumors in the off-season. Expect Luongo to stay with the club this year. While Cory Schneider will have the number one spot, Luongo is too good to only rely on Schneider. While they will not split time evenly, the two may rotate every four or five games, with perhaps even more starts for Luongo in the beginning of the season.

Speaking of the Canucks, Ryan Kesler has no timetable for his return from surgery on his left shoulder. Keep an eye on other teams as well for injuries, as there really is no time to let them waste a valuable roster spot.

Injured players probably will be dropped by a lot of teams. If you find yourself at the top of your pool and able to sit and wait on a guy, you may find some good steals in free agency that normally would not be possible.

The start of the season is always sloppy. Some players have been playing overseas or elsewhere, but the NHL still remains the best of the best. Choppy play and slow legs tend to result in penalties. Pick players that plan on seeing regular power-play time as they will, as usual, be the most valuable to the success of your team.

Some teams are in the rebuilding stage like the Montreal Canadiens. New Head Coach Michel Therrien will have less time to implement his system which will probably mean another bad season by the Canadiens. Avoid players on these teams.

Players being seen in a different jersey than last year have an uphill battle for ice-time as well as production. Keep an eye on those guys closely and don’t be afraid to drop them if they’re not cutting it. They may just be a product of unfortunate circumstances this year.

Best of luck to you and your fantasy team this year. Keep checking back often for ore fantasy hockey advice from HWB.