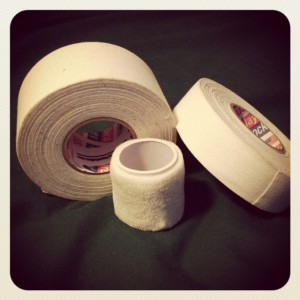 A short time ago, we had the opportunity to use and review hockey tape provided by a new online retailer Hockey Tape Online. The New Hampshire-based company is headed by Chris Healey and has been in business since February 2012. Healey spent a lifetime in hockey playing through the youth, junior and college ranks. He realized how expensive hockey equipment can be, and his goal is to make accessories like tape more affordable and reasonable. He’s doing this by offering tape in bulk quantities (think Costco and Sam’s Club) where each roll of tape is at a price significantly less than purchasing it at a retail pro shop or ice arena vending machine. He’s trying to change the buying mindset of the hockey community, saying “People buy everyday products in bulk. We’re trying to get hockey consumers to think the same way.”

According to Healey, their target market is teams and families with a several members playing hockey. “One of the hardest things with college teams and their equipment managers, is that they tend to lean towards products they have used for several years and are skeptical of change,” he said. “We have the information in front of them to decide which products to buy from us once they see our product and the value we bring.” He also went on to say how hockey families are an essential prospect for their products. “Every hockey parent is a viable prospect. Not only for their kids but for the parents who still play.” In addition, their product is great for hockey team fundraisers as teams are able to buy tape in large qualities and resell them at a reasonable price to help the team.

Their most popular product is their clear rolls of tape and white 1″ cloth tape. It is attractive for players to order their products in bulk and split the cost because when a roll of clear tape is $1.28/roll “To split the cost is hardly anything,” Healey said. He attributes some of  his early success to showing the consumer what they are getting up front. “We have bottom line pricing- no strings attached. You see the price and that’s what you pay for,” Healey said. “When you add the shipping cost, you’re still saving money compared to paying tax at retail shops.”

Their tape suppliers include Jaybird, Mais and Tape-O. Their suppliers are among the best in the hockey business as they have produced quality tape for over 20-plus years. “I wouldn’t using their tape if I didn’t personally stand by it,” Healey said. Healey also said to achieve the best shelf life for tape that is unused is to store it in a dry, cool area like the basement.

Here is a review of the three rolls of tape we were supplied:

Pros: It’s very tacky and sticky once you apply it and start using it. It feels very soft and comfortable in my hands.

Cons: The tacky doesn’t last long. I’ve had it on my stick for 6 weeks playing twice a week and I say after 7-8 times using it the stickiness lost it’s luster. It’s also thin, so the player has to either apply it over the existing tape on the handle or use a lot of it. The roll we were supplied didn’t look very big, but according to the website the handle tape is five yards long.

Pros: The tape was really durable and strong. It held up really well and was put through a lot of wear and tear. It didn’t wear down as fast as the 1.5″ tape did. It also didn’t tear and ripple along the edge like previous rolls of tape I used. Compared to other popular rolls of 1″ tape sold at retail, the texture of the tape felt stronger. We compared it to tape purchased at a local retail shop and that wasn’t nearly as good as the tape we were supplied from Hockey Tape Online.

Cons: Those who used the tape reported back saying they didn’t know if they really noticed an increase in my feel for the puck. It was certainly no worse than any other brand of tape they have used previously, but not sure if it was any better either. While they said it lasted longer than tape bought at retail, it wasn’t significantly better or worse than tape used in the past.

Pros: This tape is perfect for goalies. The wider tape is great for the larger surface seen on goalie sticks. I’ve also used it on my player stick and have gotten some compliments from my teammates because the wider roll of tape is harder to find at retail shops. If you use tape to hold your socks up instead of a girdle. it’s great because it doesn’t cut off circulation on your thigh compared to the smaller 1″ tape.

Cons: Compared to the 1″ tape on my player stick, it lasted significantly shorter and needed re-taping faster.

Conclusion: They have a great, niche business concept with their business model. For those who use several rolls of tape a season, this is a great way to save money and get a good product. They feature several colors and other accessories like friction tape and stick wax.