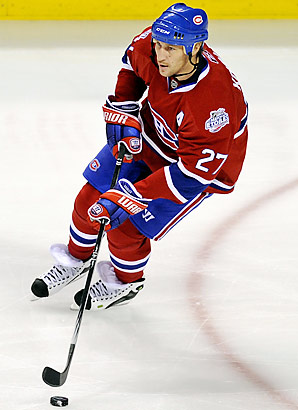 Former NHL superstar Alexie Kovalev has aspirations of returning to the NHL, and he would love to make that return to his former club, the Montreal Canadiens.

“I’d definitely like to come back to Montreal,” Kovalev recently told the Montreal Gazette. “They’re all about the young guys, but I can help in all different ways. And I can still play. I have a lot of energy.”

The 39-year-old Kovalev played for four seasons in Montreal after the NHL lockout, accumulating 102 goals and 261 points in 302 games with the Canadiens.

Kovalev left Montreal in 2009 to sign a two-year, $10 million  deal with Ottawa. He was traded to Pittsburgh at the trade deadline in 2011, who stated that they had no intentions of re-signing Kovalev in the offseason. Kovalev opted to sign a two-year deal with the KHL after failing to gain substantial attention from NHL clubs.

“I always think about having left Montreal,” he said. “You make a mistake in life and you learn from it. I would make a different move if I could have that back.”

Kovalev was released from his two-year contract with Atlant Moscow Oblast earlier this month after only one year in the KHL.

“(Hockey in Russia) is kind of a crazy business,” Kovalev said. “It’s hard to enjoy it. Come to practice and you don’t know what’s going to happen to you. It’s not totally about hockey. … I’d been there for a year in 2005 (during the NHL lockout) and saw how they treat the players. You have no idea.”

Kovalev was slowed by a knee injury that limited him to 22 games in which he scored one goal and tallied five assists and posted a minus-13.

“I didn’t want to play for a team that didn’t want me, so that was pretty much it,” he said.

Now Kovalev is eying an NHL return, hoping to generate some interest from clubs looking for offensive depth and experience.

“Hopefully, I’ll find an NHL team,” he said. “The preference is always going to be a team I’ve played on (Canadiens, New York Rangers, Pittsburgh Penguins and Ottawa Senators) because you know the environment.”

The free agency class of forwards this season drops off significantly after players like Zach Parise, who has expressed a desire to stay with the Devils, and Alexander Semin, who has had offers from the KHL. Kovalev could provide some fire power to a team looking for depth on offense. However, the more likely scenario may see Kovalev get a significant contract offer from a team desperate to meet the salary cap floor. Even then it may only be a one-year deal to better gauge if Kovalev has anything left in the tank.

“I’m working hard, training three times a week and keeping in shape,” he said. “I know what my goal is. I know what I have to do.”