The Jack Adams Award recognizes proficiency in coaching as exemplified by “the NHL coach adjudged to have contributed the most to his team’s success.” The finalists for the Jack Adams Award include Ken Hitchcock, St. Louis Blues; Paul MacLean, Ottawa Senators; and John Tortorella, New York Rangers.

While Paul MacLean really helped revive an Ottawa Senators team that was expected to coast this season while in re-building mode, I still think Ken Hitchcock deserves this award for his work with the St. Louis Blues. 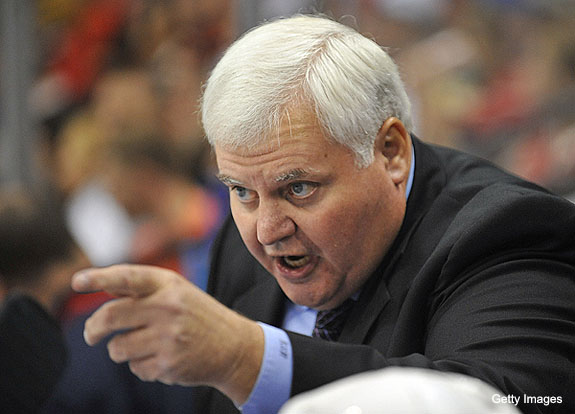 Hitchcock took a floundering Blues squad and turned them into Central Division champions, a tough feat when you play in the same division as the Nashville Predators, Detroit Red Wings and Chicago Blackhawks – all teams that made the playoffs. In 69 games with the Blues, Hitchock coached he team to 43 wins and helped the team finish with the third most points in the league. Hitccock was a huge reason for the Blues’ success and because of that deserves to win the Jack Adams Award.

My personal pick for this was either Dave Tippett of Phoenix or Kevin Dineen of Florida. Both of those bench bosses, especially Dineen, did just as much if not more with less compared to Hitchcock, MacLean or Tortorella. I won’t be surprised if Torts wins it because the award tends to favor someone who performed great during the regular season with a good roster instead of the overachiever who did the most with the less around to work with. Tortorella has won the award previously when he won that and the Stanley Cup in 2004, making him the last coach to pull off both the same year. Look for the “New York bias” to swing votes this way.

The fact that John Tortorella of the New York Rangers even made it on this lists upsets me. The Rangers have an extreme amount of skill mixed in with quite a few star veterans. On the contrary, the two other finalist have a mix of just about everything. I really like Paul MaClean of the Ottawa Senators, taking a team that no one gave a shot and took them to the first round of the playoffs. As impressive as that was, my vote is for Ken Hitchcock of the St. Louis Blues. Having an average age of 27.854 and the 4th most cap space in the league, the Blues finished 1st in the Central Division and 2nd in the Western Conference. An early second round exit to later to be named Stanley Cup Champions Los Angeles Kings (doesn’t sting as bad losing to the Cup Champions) could have arguably been a series victory had Jaroslav Halak had not been injured. Regardless, Hitch turned the Blues into a Cup contender in one season. I look forward to seeing how they do next year.

This award is a no brainer in my eyes. Ken Hitchcock hands down was the best coach in the NHL this season. His triumphs with the St. Louis Blues helped them to win 43 of 69 games he coached. Beyond that, his team earned a point in an incredible 54 of those 69 games – only losing 15 in regulation. The Blues had an impeccable home record, finishing the regular season 30-6-5 in front of the home crowd. Hitchcock turned a sub .500 team into a true Stanley Cup contender with his coaching methods and showed that despite his struggles in Columbus, he is still a top tier coach.