Pittsburgh Penguins center Jordan Staal’s name has begun circling the rumor mill with many hockey pundits and fans wondering if the Penguins could look to trade this summer.

The 23-year-old Staal, a former second overall draft pick by the Penguins, burst into the league as an 18-year-old in 2006, winning a spot on the roster right out of training camp. Since then, Staal has established himself as one of the league’s premier two-way forwards and a penalty kill specialist, holding records as the youngest player to sco 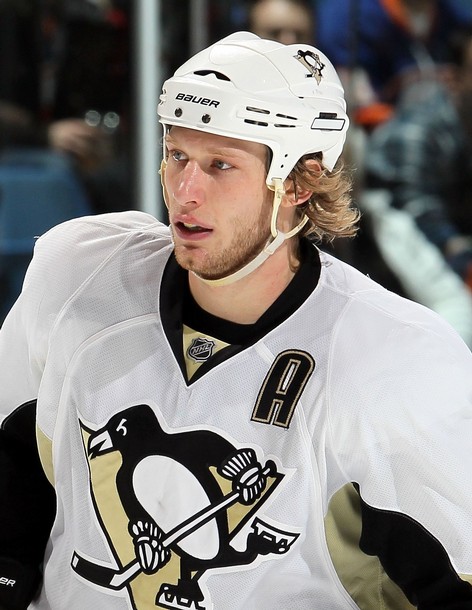 re two shorthanded goals in one game. However, with Crosby and Malkin ahead of Staal in the pecking order, Staal typically gets relegated to centering the third line, leaving many to question whether Staal would even want to stay with Pittsburgh or if he would want to test free agency next summer and perhaps sign with a team where he will play a more prominent and pivotal role in their offense.

While there are some definite rumblings and speculation regarding Staal, things will likely heat up closer to the draft. Early trade rumors list Carolina as a front-runner for Staal, citing their need for offensive depth. In addition, the fact that Jordan’s brother, Eric, is captain of the Hurricane’s could prompt the Hurricane’s to aggressively pursue Jordan Staal either through trade this summer or through free agency next summer should he choose not to re-sign with the Penguins.

The Philadelphia Flyers exposed Pittsburgh’s defense in the opening round of the playoffs, so the Penguins will likely try to restructure their blue line and add some defensive help in the offseason. As trade bait, Staal would be a hot commodity with several other teams outside of Carolina interested in his services. But the price tag may be high, likely a top-four defenseman and maybe some prospects or picks.

Remember, though, that Staal will be under contract for next season. The likelihood of Pittsburgh trading Staal looks bleak right now. After all, he is still a vital asset to the core of their team and helps keep them competitive for the Stanley Cup year after year. That’s why it seems doubtful that Pittsburgh will trade Staal this summer.  But with theemergence of James Neal as a goal scorer on Malkin’s wing, and with a healthy Crosby, Staal could become a tradable commodity if management determines they just can’t keep all of their superstars together under the cap. Still, the probability that Staal plays for the Penguins next season seems high.

If contract negotiations don’t go well next season, or if Pittsburgh finds themselves with holes in their roster that they may be able to fill through a trade before the trade deadline, then the team may look to trade Staal next season or trade his rights next summer before the draft or before free agency. Otherwise, it would take a lot for a team to pry Staal away from the Penguins this year.

Keep in mind that Staal has given no indication that he wants a trade nor have the Penguins hinted that they are willing to trade Staal this summer. But these rumors start somewhere, and this one comes with the knowledge that both Staal and Sidney Crosby will be unrestricted free agents at the end of next season, and both are due for a raise. If the Penguins intend remain competitive with both Crosby and Staal on their roster, in addition to superstar Evgeni Malkin, then the team may need to get mighty creative with their salary cap space. Otherwise, trading Staal may be the most logical option.

After all, you can’t trade Sidney Crosby…right…?