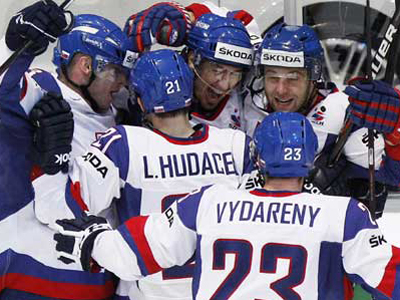 In the first of today’s quarterfinal matchups Canada was eliminated as Michael Handzus scored late to give Slovaki a 4-3 victory. With only 2:28 left in the game, Handzus scored a power-play goal to lift his team to the semifinals.

The Slovakia power play late in the game came from a five minute major on Ryan Getzlaf after a knee on knee hit to Juraj Mikus. The hit resulted in Mikus being helped off the ice. Ultimately, the Slovakian squad made Getzlaf, as well as Canada, pay for the hit.

“He jumped inside on me,” Getzlaf said of the hit. “He’s a smaller guy. All I tried to do was get a piece of him with my shoulder, which I did. It’s a sick way to lose; it’s a tough pill to swallow. It hurts. It hurts like hell right now. To lose in that fashion is not easy to swallow. The guys worked way too hard to be delivered something like that.”

Slovakia opened the scoring, grabbing a quick lead just under six minutes into the game. Tomas Kopecky was in the right place at the right time as he crashed the net and had a shot bounce off his leg and into the net. Miroslav Satan padded the lead not longer after as he fired a shot which beat a screened Cam Ward. Feeling the pressure, Canada began to turn it on later in the period and pulled within one as Evander Kane scored at 16:14 of the first.

In the second, Canada clearly dominated the opposition and controlled the puck for almost the entire period. The pressure resulted in a 17-7 shot advantage during the period, but Canada only managed two goals during the offensive onslaught. Jeff Skinner tied the game 2-2 at 6:30 of the second with a power-play goal. Alex Burrows added another tally late in the period to give Canada a 3-2 lead heading into the third period.

While Canada maintained strong and physical play during the third, they collapsed late in the period. With six and a half minutes left to play, Evander Kane gave the puck away turned the puck over while in the offensive zone. The resulting rush lead to a Milan Bartovic which was shot which Ward stopped, but Bartovic followed it up and put home his own rebound to tie the game. Ryan Nugent-Hopkins was assessed a boarding penalty shortly after, and it was just after Canada finished killing it off that Getzlaf was sent away for his knee on knee hit. It only took Slovakia four seconds to capitalize on that power-play and seal the victory.

The loss now marks the third straight year that Canada has made a quarterfinal exit from the World Championships. The have yet to medal since they won Gold at the Vancouver Olympics.

Slovakia will play the winner of Sweden and the Czech Republic in the semifinals on Saturday.