Agent says Alexander Semin will not re-sign with Washington Capitals

The Washington Capitals may be dealing with another departure as rumors have surfaced that forward Alexander Semin intends to test the waters when he becomes an unrestricted free agent on July 1.

Semin’s agent, Mark Gandler, told ESPN the Magazine that his client decided to test free agency and would not be re-signing with the Capitals during the offseason.

“It was good while it lasted. With the lack of playoff success, with the direction they are going. They decided to change directions. That’s within their rights. Alex doesn’t fit into that system obviously,” Gandler said. “It just 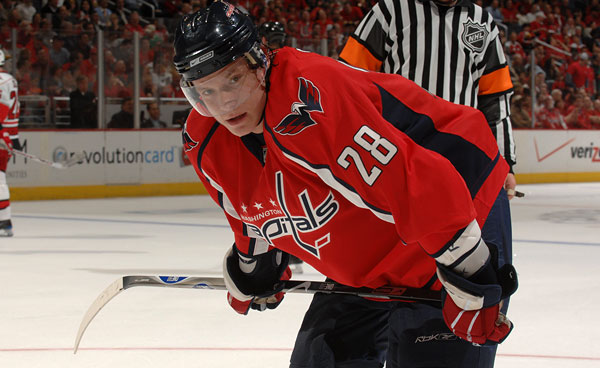 doesn’t make any sense to him. He plays, he did the best he could under the circumstances and he earned his right to be a free agent.”

This comes on the heels of news that Capitals coach Dale Hunter will not be returning to the team next season. Hunter implemented a more defensive, puck-possession style of play that the team may look to continue when they hire a new head coach for next season. If so, that could be a big factor in Semin deciding not to re-up with Washington.

However, Gandler may have spoken preemptively about his client’s future. Semin was en route to join the Russain national team at the World Championships with teammate Alexander Ovechkin while this story unfolded. So when Semin landed and reporters questioned him about his agent’s remarks, Semin quickly clarified his stance.

“This is all just talk. Words can get twisted,” Semin said. “There was no talk at all that I am not going to sign with the Capitals for sure. I have not talked to them [the Capitals] about leaving. And please don’t ask me questions about the next season anymore.”

Gandler later clarified his comments in another interview with TSN Radio, but stuck to the earlier theme that Semin is unhappy with the way the team is utilizing his skills.

Even if the Capitals want to bring Semin back into the mix next season, they would likely offer less than the $6.7 million he is making this season. More than anything this is probably a ploy by Gander to churn interest in Semin and possibly drive the price for his client higher in the offseason – a price that the Capitals will have to match if they intend to keep Semin in the loop next year.

At this point, it would be incredibly surprising if Semin re-signed with Washington. He averaged a little more than 16 minutes of ice time per game this season, the lowest since his rookie year, and his numbers have steadily declined over the past several seasons as well. And with the team looking to move in a more defensive-minded direction, a sniper like Semin, who doesn’t play important minutes, doesn’t seem to fit into their long-term agenda.

Still, at 28-years-old, Semin is in the prime of his career and several teams would be more than willing to sign the enigmatic winger to a lucrative contract – especially teams needing to spend money to meet the salary cap floor before the start of the season. After all, Semin is only two years removed from a 40-goal season. Don’t be surprised in a few weeks to hear teams Carolina, Colorado, Columbus – and even Detroit – are all linked to possible contract offers for Semin.