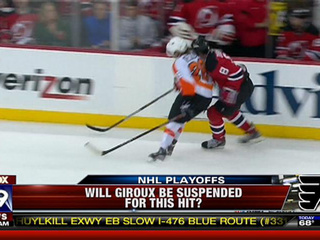 The Flyers will have to play a critical Game 5 on the road without their best player after this hit Sunday night.

Philadelphia Flyers forward Claude Giroux dealt a big blow to his team heading into a crucial Game 5 tonight against New Jersey after Brendan Shanahan ruled in his court that arguably the best player on the Flyers this playoff season must sit a game after a reckless hit to the head Sunday afternoon.

The blow came just at the end of the second period in a game that the Devils won to take a 3-1 series lead. Giroux, a first time offender in the NHL’s disciplinary system, connected on a shoulder-to-head check on Dainius Zubrus of the Devils. Zubrus was down on the ice for a short period of time but did get off the ice and finished the game.

While looking at the video, any official with a brain could have predicted Giroux would have done something stupid. It started earlier in the play when he was legally checked in front of his own bench. Sure the hands got a little high towards his face but it wasn’t anything worth calling a penalty. Giroux was angry and frustrated as seen in the video below.  Seconds later he’s venting his beef with the official and continued to do so when he turned his back towards the play to scream at the official. As seen, he was more focused on the no-call instead of his shift. He would have been better off getting off the ice at his bench and used the intermission to cool off. Instead, he decided to take out his anger on the first player with the puck he seen- Zubrus.

As an official, I’ve seen this many times at various levels (from the youth level to adults) where a player thought a penalty should have been called against the other team but since it wasn’t called decided to commit a penalty himself. Lesson for the youth hockey players at home: if you get slashed, hooked or checked and the official doesn’t call a penalty, let it go. If you can’t let it go, get off the ice and let someone else with a clear head skate. You don’t want to retaliate and cause your team to be the one that has to play shorthanded. In your case it would be two minutes while in the cause of Claude Giroux- missing Game 5 of the Stanley Cup playoffs when your team is down 3-1.