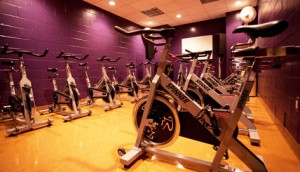 For many of us the off-season is nearly here, as we prepare to exchange our hockey stick for a driver. For a select few, the off-season workout preparation begins. We write down countless activities like treadmill exercises to do, start preparing our healthier grocery lists and so on. One exercise that tends to be overlooked for an off-season workout is indoor cycling, or commonly referred to as spinning.

Lance Armstrong changed the face of the professional cycling hype back in the late 1990’s and early 2000’s. Being diagnosed in 1996 with testicular cancer and later winning the Tour de France 7 times from 1999 to 2005, road racing cycling became a nationally televised event that peaked the interest of many new viewers.

Stationary bikes are designed to mimic the ride on the road. The bikes have a knob to modify the difficulty of pedaling, specially shaped handlebars, and a weighted flywheel that simulates the effects of inertia and momentum when riding a real bicycle. The pedals also mimic the real thing by allowing riders to purchase shoes (optional) that clip in, allowing one foot to push down while the other pulls up during a foot stroke.

Classes offered at local fitness centers typically consist of one instructor leading a group of students. Instructors use both music and motivation to get the most out of their students. Varying the workout to mimic real road characteristics, the instructor leads students through different riding stances from seated, standing or crouched.

Spinning is for any level of athletes. Students have the ability to decrease or increase their resistance (easier or harder) at will, allowing them to change from an aerobic (low intensity) to an anaerobic style workout (high intensity). Students can expect to lose over 500 calories in 45 minutes of cycling while toning and building muscle in not only the legs, but in the upper body as well.

Eddie and I have been going to spinning classes this past month after purchasing an introductory package through Groupon. The workout has provided my legs with a shock that has seen benefits on the ice. My legs are looser right out of the gate, feel stronger and my endurance has increased. Physically, I feel better. After completing a workout you feel a sense of pride by completing a long, intensive workout. Furthermore, my appetite has curbed and I have lost weight consistently for 2 weeks now.

I plan on continuing throughout the summer until hockey starts back up again and I highly encourage any hockey player to take a course. Most local facilities offer a free week of classes for you to try it out. You need not be intimidated as the instructors are most helpful in helping a brand new spinner. One piece of helpful advice I will offer is that after the first few sessions your butt will be sore from the seat. Fear not, as your butt does build up endurance and it is gone by the third class.