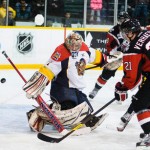 Wearing skates that were too small, Connor Crisp manged to make 32 saves as his team lost 13-4.

From the area of things you don’t see everyday at the hockey rink, a skater for the Erie Otters of the OHL made his first appearance of the season in an unusual way: backup goalie.

17-year-old Connor Crisp, a center by trade, had shoulder surgery earlier this season and had not seen action until yesterday when he had to play goalie due to injuries to the starter and the backup. A little back story on what happened: backup Devin Williams suffered a head injury earlier this weekend in a game against the Saginaw Spirit, leaving starter Ramis Sadikov to play Sunday against the Niagara IceDogs. Sadikov was injured when he was ran into early in the contest. Crisp did not dress for the game originally but was listed as the emergency backup goaltender on the score sheet. Little did he know, 1:45 into the contest his cell phone would be ringing with orders to go straight to the locker room as he was going to be hitting the ice. The team must have been very desperate for a goalie as they are having a player who recently been cleared to play from the shoulder surgery play goalie.

After a 20-minute delay to change into Sadikov’s gear, Crisp entered the net in his own No. 1 jersey that the equipment manager made prior to the game. His first shot of the game from just inside the blue line entered the net as he went to make a leaping glove save but the pick snuck past him and into the net. He managed to keep the last-place Otters into the game until midway through the second period when the IceDogs scored to take a 4-2 lead. Crisp ended up facing 46 shots on goal against one of the top teams in the OHL as the IceDogs has the third-best record in the league. Crisp managed to make 33 saves as the Otters were routed 13-4. 2011 fifth-overall draft pick Ryan Strome (New York Islanders) stacked his goal total as he lit the lamp five times. In addition to Strome, the IceDogs have two players who were on this years World Junior Championship team for Canada.

Off the ice, the IceDogs management was less than thrilled an opponent at the highest level of junior hockey did not dress a backup goalie. Niagara owner Bill Burke said to the St. Catherines (Ont.) Standard “It’s brutal. I don’t know how you can come to the game without a backup goalie,” he said. “Williams (backup goalie Devin Williams) got hurt on Friday night and here we are on Sunday.” He went on to add “I’m phoning the league on Monday. It changed our whole flow of the game. I’m so happy it was the Sunday game and not the Thursday game because we would never have recovered for the next game”.

I don’t know how you can come to the game without a backup goalie.- Niagara IceDogs owner Bill Burke

According to a former Otters goalie, this wasn’t the first time this season the team dressed only one goalie against the IceDogs. Now playing for the London Knights due to a trade in January, Tyson Teichmann told the London Free Press ” That time (December 1), I was hurt, so the team went without a backup and Rammer played but luckily, he didn’t get hurt. For Connor, they would’ve had to take off Rammer’s pads and he would’ve had to strap those on. Teams don’t just don’t carry around an extra set of goalie equipment.”

For those unfamiliar with major junior hockey, A major junior team has to find someone available who is 16 to 20 years old, not engaged with her/his current team and not planning on playing at a U.S. college. Dressing for one Canadian Hockey League game means forfeiting NCAA eligibility according to a game recap posted on Yahoo! Canada.