The Buffalo Sabres appear to be in a state of disarray after an embarrassing loss to the Detroit Red Wings Monday night in which they let up five goals in the first two periods, prompting head coach Lindy Ruff to pull netminder Ryan Miller, and at times looked displaced and heartless.

Several players sounded off about the loss, including Miller, who is a native of Michigan and played in front of family and friends last night. 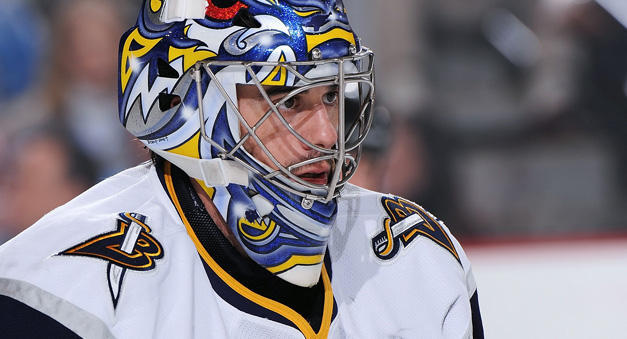 “It’s embarrassing,” said Miller, whose brother Drew plays for the Red Wings. “I got family and friends here. Everybody came to watch Drew and I play. At least they got to watch Drew perform.”

Buffalo captain Jason Pominville also commented on the loss stating, “The injury excuse isn’t what this team is about. We have enough guys in the lineup to win games and we’re not doing it right now. We have to find a way.”

The Sabres currently sit 11th overall in the Eastern Conference – seven points out of a playoff spot. Injuries have hampered the team, but key offseason additions have failed to live up to expectations as well. Ville Leino, who scored 54 points last season, including 19 goals, only has 10 points so far with three goals. These numbers are far from what the team expected when they signed Leino for a $4.5 million cap hit over the summer.

Miller himself has also struggled in net, posting a 3.12 goals against average along with a .898 save percentage – some of the worst numbers of his career.

“It’s not good hockey. It’s not good from top down,” Miller said of the team’s play along with his own. “I need to be better. I can’t seem to find a night where I can get in a groove.”

Going 2-6-2 over the last 10, the team’s recent struggles have prompted early discussion about their intentions come trade deadline time. Unless things dramatically improve over the next few weeks, the Sabres will likely be sellers. But who on the roster might be on their way out?

Brad Boyes, Paul Gaustad and Jochen Hecht are all potential unrestricted free agent that may have some value. Outside of those three, Tyler Myers is an interesting name to consider. Some rumor mongers have suggested that Buffalo may be willing to part with Myers as he has not developed like the team had hoped thus far. Myers is in the last year if his entry level contract before his new contract kicks in next season with a $5.5 million cap hit. Still, the likelihood that the team trades Myers remains slim for the time being.

Until then, Miller seems adamant that a roster overhaul won’t change what currently plagues the team.

“If you guys really think there’s going to be any kind of trade made anywhere that’s going to affect this team any more than we can affect it in this locker room, you guys are just … I don’t know,” said Miller. “I don’t know what to think because there’s no such trade.”

“I’m under the premise that a one player trade deal can work at times,” Ruff said. “I’ve seen a lot of them where it doesn’t have any impact. The only way you’re going to succeed is by uniting as a team and getting through this.”

Ruff continued: “One player isn’t going to make a difference. A lot of times that one player leaving is a good player, and you’re getting a player from another team that had been having a tough time over there. It can work in situations. There are other times when it doesn’t make any difference at all.”

The immediate future looks rough for the Sabres as they face off against the Blackhawks, Jets, Blues and Devils before the All-Star break at the end of next week. All of those teams are playoff teams right now and the Sabres desperately need the points if they intend to make a push for a playoff spot themselves.