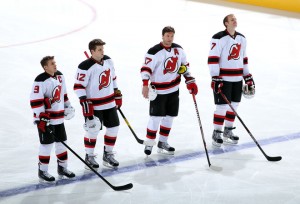 Zach Parise may be a New Jersey Devil today, but come trade deadline or free agency, expect him to be on the move.

New Jersey Devil fans have it tough, real tough. If it is not bad enough that the Devils are currently sitting 12th in the standings in the East, young superstar Zach Parise is likely to play for another team come trade deadline or in the off-season.

The Minnesota native Zach Parise is coming into his production years at the age of 27. Playing 7 seasons with the Devils, it is time for some new scenery. With a Silver medal under his belt from 2010, Parise wants a Stanley Cup ring, that of which the Devils won’t do for quite some time.

The Devils of old were once a powerhouse team. Hard hitting defender Scott Stevens, a younger Martin Brodeur between the pipes and head coach Jacques Lemaire made every team cringe. How the years have passed, as the Devils of new are nothing but a pushover. Last year the team missed the playoffs by 12 points. To this day the team is once again sitting on the outside looking in. An argument could be that they are only 2 points back from 8th, but the Eastern Conference is a tricky beast.

My how a few acquisitions, trades and years makes a difference. The Florida Panthers and Toronto Maple Leafs have surprised the hockey community as both are currently sitting in playoff spots. It seems Brian Burke’s master plan to take over the hockey world is finally taking form. (insert lightning/thunder/evil laugh now) On the flip side, the Washington Capitals, Montreal Canadiens and Tampa Bay Lightning, all three teams who made the playoffs last season, are currently on the outside looking in. The Devils competition is only going to get tougher.

Over a quarter way in, Parise has only 16 points in 25 games. His total is from a combined 7 goals and 9 assists, a rather poor total for such a player of his caliber. On top of that, Parise has a plus minus rating of negative 10, second to worst on the team, that of which belongs to Ilya Kovalchuk with a negative 11.

Devil fans enjoy the season while it lasts, despite the slow plummet to miss the playoffs yet again. Parise is on the move come trade deadline or free agency. If you are lucky another team will be offering a trade and you can get some depth and draft picks.