The rumor mill began buzzing earlier this week with word out of Anaheim that general manager Bob Murray is entertaining offers for Ducks forward Bobby Ryan. Those rumors seem to have exploded since then with every blog, news site and armchair GM contributing their opinion on what it would take for their team to acquire Ryan.

No real denials have come out of Anaheim to squash the Ryan movement rumors, leading to speculation that offers are at least being entertained. And about 29 teams around the league are currently assessing their rosters and cap situations to figure out how they could make a reasonable pitch for Ryan. 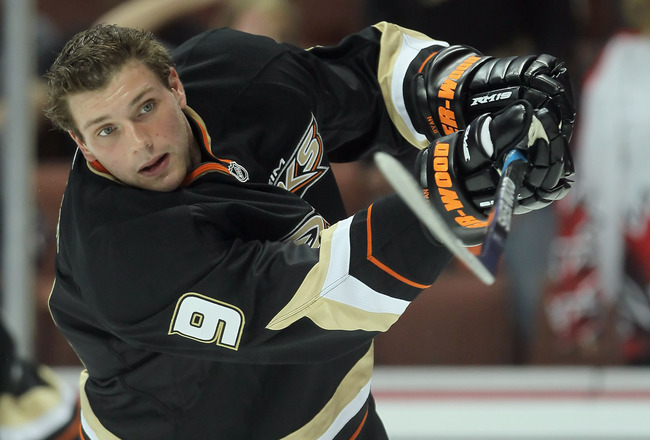 Ryan is a young, versatile player who can pretty much play any forward spot. He has three full seasons of NHL experience under his belt and has improved his point total in every season played. Ryan has scored at least 30 goals in each of those seasons and topped out at 71 points last year, arguably with room to improve. He has playoff experience, international play experience and would be a great addition to any lineup. Not to mention Ryan’s $5.1 million cap hit makes him a reasonably affordable asset.

So which teams might actually put together a reasonable pitch for Ryan? Rumors put Buffalo, Toronto, Philadelphia, and both New York teams in the mix. Nashville could also take a swing and some dreamers have Columbus making a straight up Carter-for-Ryan swap. Boston, Dallas and Edmonton have also been floated as possible destinations as well. Needless to say, almost anyone needing an impact forward is in the running.

The most intriguing destination in this list is Boston. Ryan would provide the team an offensive boost and he would fit their system well as he plays responsibly at both ends of the ice. The price would be hefty though. David Krejci, a restricted free agent, could be part of a possible trade package. A defenseman and perhaps a prospect or draft pick or two would also likely be included. Anaheim has holes in their roster and Krejci alone would not be enticing enough.

The two roll-your-eyes-at-the-obviousness teams on that list are the Rangers and Flyers. Seriously guys, you can’t have every player worth having in the NHL on your roster. However, both teams do have some depth forwards and some d-men that they could package together to entice Anaheim. Perhaps New York would be willing to part with Dubinsky and Del Zotto? Philadelphia may consider flipping Simmonds, shipping Van Riemsdyk or even including Matt Carle in some capacity.

The most likely destination would have to be Toronto. With Brian Burke calling the shots on Toronto, he would definitely pounce to get Ryan, the player he drafted second overall in 2005. Besides, Burke has adamantly stated over the past two years  that he wants another top-six scorer – something that he hasn’t been able to secure (unless you want to count Tim Connolly as that, but we don’t). Joffrey Lupul has been a significant surprise, but having Ryan on board would certainly solidify Toronto’s top two lines. And after several poor seasons, the Maple Leafs have the prospects to trade away as well. Nazem Kadri could be included, as could Nikolai Kulemin, Luke Schenn or Carl Gunnarsson. However, Toronto has zero cap space to work with this season, so the trade would have to be tit-for-tat salary wise in order for this to work for Toronto.

Whether a trade actually happens remains to be seen, but the Ducks need to make something happen if they plan on digging themselves out of the 6-13-4 record they currently have, and Ryan seems to be the disposable piece of the puzzle. I guess we should forget about a Selanne return to Winnipeg for Enstrom straight up, eh?