The Islanders "Fisherman" logo of the mid-90's. 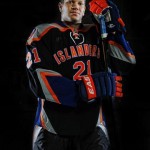 Wednesday, the New York Islanders revealed the new alternate kit they will be wearing during the season. They are no stranger to the alternate jersey universe, as they have graced us with the “Fisherman” logo to your right in the mid 1990’s. That was a logo you’d more see on the jersey of your Sunday night beer league team that is sponsored by a bar than on a professional franchise.

This time around, they changed things up and went with the intimidating but popular black as the main color. They kept the design simple, with an arched “ISLANDERS” across the chest with the number underneath the team nickname and on the sleeve. The shoulders are gray with orange and blue trim. The standard Islanders logo flanks the edge of the shoulders. The numbers are orange trimmed in gray and blue. The neck features the lace-tie which has become popular in recent years. The team had an event at the Nassau Coliseum team store which several players attended including John Tavares, Matt Moulson, Kyle Okposo and their families attended along with fans. Check out the video below from the photo shoot the players did when they first wore the uniform after a recent practice.

HWB is participating in “Movember” to raise funds for Pancreatic Cancer Research. Make a difference, make a donation.