Fantasy hockey players who could make an unexpected impact

Looking to make a few tweaks to your Fantasy Hockey lineup or compensate for unexpected injuries? Take a look at your waiver wire to see if some of these players might be available.

Rich Peverley: Peverley (pictured) will skate on a line with Patrice Bergeron and Brad Marchand. Peverley has good hands and the capability to put up good numbers. However, his time in Atlanta allowed him to fly under the radar 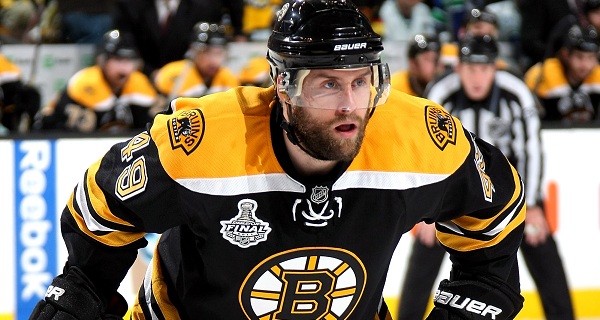 for most Fantasy owners. He looked good in the season opener and a 50+ point season might not be out of the question if he stays on the second line.

Vinny Prospal: As expected, the veteran winger will start the season on the top line in Columbus with Rick Nash and Jeff Carter. Injuries limited Prospal to just 29 games last season, but he managed to post 23 points in that time with the Rangers. Expect a bounce back season in terms of health and production for Prospal this season – especially if he sticks on the top line with Nash and Carter.

Wojtek Wolski: Wolski was originally slated to start on the top line for the Rangers alongside Brad Richards and Marion Gaborik. However, rumors now predict that Brandon Dubinsky will have the honors, but expect coach John Tortorella to rotate Wolski in there at some point. Dubinsky is a solid second-line center. Remain cautiously optimistic that he eventually finds his way back to that role allowing Wolski to bump up to the top line.

Petr Sykora: After a season away from the NHL, Sykora went from training camp longshot to a roster player for the New Jersey Devils. In fact, Sykora will play on the top line alongside Patrik Elias and Zach Parise. Looking back, Sykora was largely ineffective during his last NHL outing with the Wild (3 points in 14 games), but the Wild played a very defensive-minded system. Sykora put up 20+ goals in each of the three seasons prior to his flirtation with the Wild. Don’t hop on Sykora right away, but monitor his play aggressively to see how he clicks in New Jersey.

Blake Wheeler: Wheeler posted 17 points in 23 games for Winnipeg (formerly Atlanta) last season after getting traded from Boston. An increase in ice time should make Wheeler relevant for Fantasy owners this season.

Gabriel Landeskog: Not only does he have a fun name to say, but he was also largely viewed as the most NHL-ready of all the top draft picks from the 2011 NHL Entry Draft. It’s uncertain exactly where he will fit into Colorado’s lineup this season, but if he sees time in the top-six he could put up solid rookie numbers. Fifty points? Perhaps. Add him to your watch list and wait and see where he fits in.

Ryan Johanson: Johanson will be one of several rookies lacing up for Columbus opening night. He has good size and boasted huge numbers in the WHL last season with 92 points in 63 games. Columbus expects big things from him this year. You should too.

John Carlson: With rumors swirling that Marc Staal could miss the first month of the season thanks to concussion symptoms, Carlson could be a solid replacement pickup. Carlson posted 37 points last season and was a plus-21. If Washington’s offense gets back up to the level fans are used to, Carlson could post 40+ points this season.

Ian White: Another defensive replacement, White scored the golden ticket this offseason by signing with Detroit and then getting paired with Nicklas Lidstrom. White was strong on the power play in the preseason and could post career highs in points. Expect big power play numbers this year.

Tuukka Rask: Bruins coach Claude Julien stated earlier this week that the Bruins don’t have a number one goalie – they have two. Basically, to cut through the coach-speak, expect Julien to use Thomas a tad more sparingly this season in order to keep him fresh for the playoffs. Rinne will benefit and see more games this year and could see spurts of consecutive starts if he gets hot. He would be a solid addition to any Fantasy lineup if he’s available.