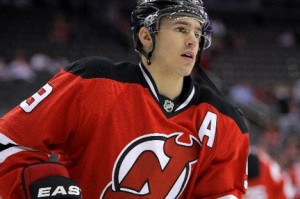 Change that "A" to a "C" and what do we get? Still uncertainty on whether or not the New Jersey Devils can lock up Zach Parise at the end of his contract.

The New Jersey Devils have named Zach Parise their team Captain with Ilya Kovalchuk and Patrik Elias as Alternate Captains. Parise, who has played all 6 NHL seasons with the Devils, could be the face of the franchise for years to come. Or maybe not.

In the off-season Parise and the Devils had a shaky go at signing the young 27 year old to a multi-year deal. What looked like an inevitable arbitration hearing, the two sides finally agreed upon a 1-year, $6 million dollar contract. For Devil’s fans, this was a step in the right direction in keeping Parise long term. For all other hockey fans, it seemed likely Parise will become possible trade deadline bait in the upcoming NHL season and/or one of the top off-season free agents.  With the new Captaincy placed firmly on his chest, hockey fans are now left to wonder even more what the future holds for the star forward.

The Devils have named Parise Captain, for better or for worse, but in hopes of creating more of an emotional tie to the organization. In doing so, the team is hoping that they can avoid losing him to another team after his contract is up after this season. What surely is a ploy could very well come back and nip the Devils in the butt.

Not all players are cut out to be Captains, but that does not seem to be the case with Parise. Parise is a superstar and a genuinely good player with heart. When healthy, Parise can easily reach the 35+ goal mark, throw in about 45 assists, and you have yourself a perennial 80 point player. Like many sports, those who produce tend to be Captain.

Still though, the question of if Parise wants to play for the Devils has to come into play. Without a doubt Parise will give it his all as Captain for the Devils, but if he ends up moving to a new club, what are Devil’s fans supposed to think and feel? Are fans OK with that, or does it create a negative, hopelessness feeling inside?

The Devil’s organization are playing with fire by making Parise Captain. Maybe it will work out in their favor, they are the Devils after all. But maybe their decision will not. But hey, if the Vancouver Canucks can make a mistake naming goaltender Roberto Luongo Captain, the Devils can make one too.