Offense: Before Boston was able to hoist the Stanley Cup earlier this summer, they had a hard-fought series with Montreal. Habs fans (like myself) left ourselves scratching our heads at the end of the first round series saying “What if?”. What if Montreal was able to seal the deal against their bitter rival and won two of five games after starting the series 2-0? What if one of the three overtime games went in Montreal’s favor? What if Tim Thomas hadn’t stood on his head during the two-overtime Game 5 and prevented the Canadiens from grabbing a 3-2 series lead? Someone different (most likely Vancouver) would be the champions. 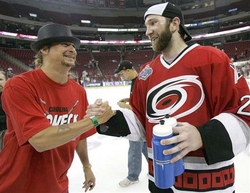 Erik Cole has one Stanley Cup to his name. Can he help bring Stanley Cup No. 25 to Montreal?

The offense is what lacked firepower  last season, as they ranked 22nd in goals-per-game despite having one of the better power play units that finished seventh in the league. This is where Erik Cole comes into play. He will bring added firepower up front, and don’t forget about Scott Gomez. Looking at the numbers, Gomez had one of the worse seasons of his career with seven goals and 31 assists in 80 games. He also had a team-worse -15 rating. The team would have been much more successful if that was even cut in half to -7. Imagine how much better he and the team would have been if it was even or in positive numbers. Hopefully he can find the net more often with some new faces around him.

And don’t forget forward Max Pacioretty, who suffered a serious injury at the hands of Zdeno Chara last season. He has been skating over the summer and told reporters he is stronger than before his injury because he has had more time than usual to workout. He had 24 points in 34 games last season. Expect him to reach at least 55, potentially 60 points this season. Another young player to watch for is center Lars Eller. Eller came to Montreal in the Jaroslav Halak trade and had a decent season last year when he scored seven goals in 77 games. But he is still young (22 years old) and his stock can only go up this season.

Defense: Despite losing Wisniewski, the Canadians could have one of the best blue line corps in the league. They have a lot of young, experienced players as well as the veteran who is the leader of the pack. Andrei Markov has had the worse luck in recent years with various knee injuries, but the team showed faith in his ability to stay healthy as he signed a contract extension until 2014. In his absence last season, rookie P.K. Subban picked up the slack as he became a fan favorite last season.

He was solid on the power play as nine of his 14 goals came on the player-advantage. He wasn’t selected as a Calder Trophy finalist, but he was the second Canadiens defenseman to be named to the NHL All-Rookie team (Chris Chelios in 1984-85 was the other). He was also the first defenseman in the storied history of the Canadiens to score a hat trick as he did so against Minnesota. His slap shot is lethal and clutch as he tied Game 7 against Boston with under three minutes left. Look for him to improve and become a 1-B leader behind Markov on the blue line.

Goaltending: As much as the fan base gives Carey Price crap for the soft goals he tends to allow, he was solid in goal last season when he tied for the league lead with 38 wins. He was the first Montreal backstop to lead the league in wins since #33 earned 31 wins in 1989. Their backup Alex Auld remained in Canada but signed with Ottawa. They did get an upgrade as they were able to snag former starter Peter Budaj.